Wow, I have to admit. I never expected a game based on one of the most questionable human traditions I’ve seen – the Running of the Bulls. I won’t go too far into it, but at the very least, the bulls finally get a tiny bit of symbolic revenge against human beings. Run as a bull or run as a human, either way, a person is getting gored and all thanks to developer ZhouYang. Angry Bulls is available on the iPhone, iPod touch, and iPad for $0.99.

Onscreen controls with joysticks? Really good. Controlling a bull and trying your best to kill as many people as possible? Horrifically fun. Gaining special moves like a frenzy mode and dealing out more damage? Awesome. Controlling a human and trying to stay as close as possible to the bull’s horn without dying? Intense. What about graphics? Crowds, human models, the bull model, and the user interface design? Excellent. Some textures in the background do have obvious mirroring, but it’s forgiven by the gameplay distracting you from those, so great! 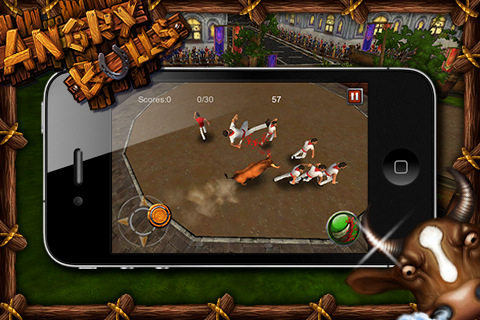 So let’s put that all together. Really good, horrifically fun, awesomely intense, excellent game… this seems like it would be a perfect 5!

I must mention, despite my praise, that there are some minor issues still around. I’ve experienced random crashes while changing modes or hitting the ‘back’ button after playing a game. The gameplay does get repetitive after just a few plays in any of the 3 modes. I felt that the gameplay during the Mode of the Brave was a bit too limiting. Maybe obstacles like merchant stands, cars, or whatever would normally be on the street could be placed around and you’d have to jump over them rather than having a ‘push’ button that I never used. These are barely any complaints however. Angry Bulls is a legitimately fun gaming app and it actually drew me into firing up the app again even after another crash. 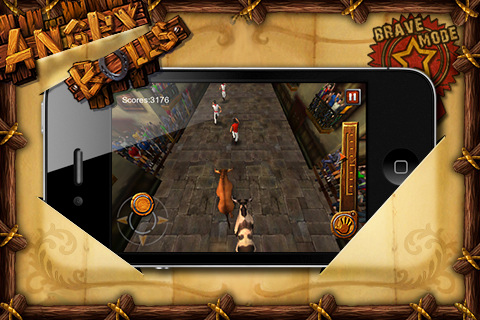 This is a very fast, entertaining distance game with 3 modes and excellent presentation. Get it. Simple, no? Oh, and save the bulls. Traditions can stop… like offering chickens to gods for good weather or throwing goats off towers. Stop it. It’s dumb and it’s cruel, and I’m not even a PETA supporter. I can’t wait for Bulls to gain human sentience randomly during a run and start killing organizers and capturing them and pitting them in events where they run away from rampaging bulls in a fight for, hey wait.