DrawRace is a new concept in line drawing games for the iPhone from RedLynx Ltd featuring a top-down track racing game where all you have to do is draw the path for your racer guy and he does all the rest. Other line drawing games have paved the way for what DrawRace is doing today, combining speed, accuracy and the art of drawing with car racing games. Pure genius!

So basically you are shown a track and the number of laps required for that track. You draw a path in the guided direction using your finger on the screen, and the app creates it using a dashed red line as you go. Once you’re done, the race starts and your car follows your drawn path during the race as you watch. 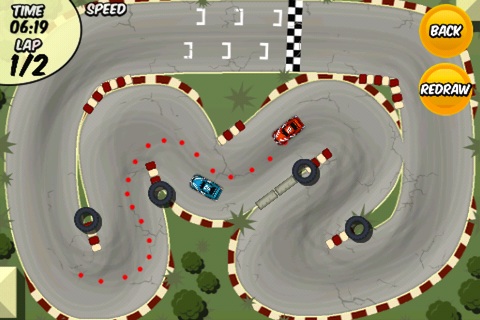 Drawing is obviously the only time you get to interact with the game so that is where you would be spending time improving your skills. If you have a really steady hand, you’re in for a good time. Can you draw nice straight lines, and perfectly rounded corners? Even better. Also if you’ve ever raced a car before or have raced slot cars even, you can take advantage of your knowledge of racing physics in DrawRace. Slow and steady doesn’t cut it here. You have to cut sharp corners and speed up on the straight a ways. The faster you draw, the faster your car goes, and vice versa. Drawing very slowly will translate to breaking. You can even do some drifting, and hitting objects along the track will slow you down. You don’t have to draw a full continuous line, but it helps. If you screw up badly you can “redraw” but you have to do the entire race, even if it was a 5 lap race and you were 4 laps through drawing, you have to start drawing all over. 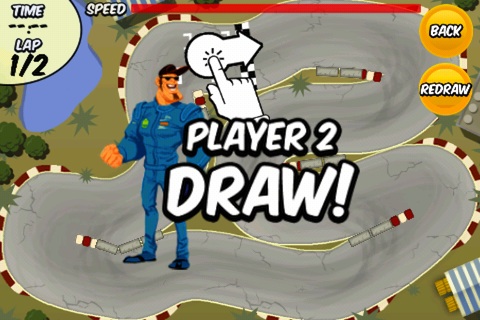 There are 20 levels in the game including a handy tutorial level, and you can play those in any mode. The game features 3 playing modes: 1 Player and Network, 2 Players, and 3 Players. In 1 Player mode, you can race against your ghost (personal best record) or do a time trial. You can also play against someone live via the network after DrawRace connects to their server to find you a partner. Unfortunately during our tests we kept getting failed connection. After waiting 30 seconds the game times out. It might be the popularity of the game that’s bringing down the DrawRacer servers right now, we hope.

In the 2 and 3 player modes, you get to pass the iPhone/iPod touch to your friends who draw their own paths. The 1st player is always the red car. The 2nd car is blue and the third car if used is green. You can submit your score to the game’s leaderboard servers, when its works.

DrawRace uses hand drawn characters and artwork, and has a fast paced soundtrack to keep you pumped up. If you are at all into line drawing games, and or are a fan of slot racing games, this is a must have.