The history of the Samurai is deep and rich of honor, strength of body and mind, and war. Along with Ninjas, it’s one of the most recognizable Japanese imagery for pop culture (that and schoolgirls… sad isn’t it?) So what does that have to do with Samurai II? Nothing. Samurai II: Dojo is a straight up beat-em-up 3rd person combat game where you face-down armies of badguy samurai who are trying to brutally kill you inside of an arena ring! Oh heck yeah! Released by Madfinger Games, Samurai II: Dojo is available as a universal app for Free in the App Store. There is also a sequel available named Samurai II: Vengeance which is also a universal app for $2.99. 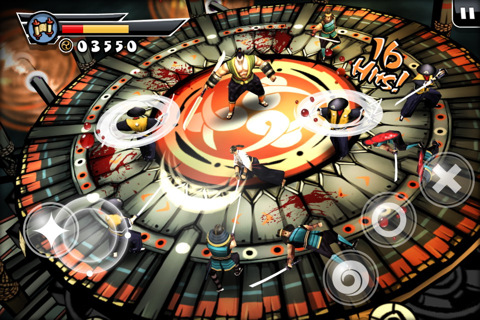 This is a brutal game. Enemies swarm you constantly on this blood stained arena and with each slash you rip your opponents are with bloody explosions. Heads and arms get cut off and amazingly, you can cut a guy in half. The blood effects are very nice and the combat is relatively fast. The graphics are slick and the texture work is excellent. Controls are responsive and the game gives you 3 buttons to use: X, which is the light attacks, O which are the heavy strikes, and … spiral… I think… which is the dodge button. But that’s not the only thing that is brutal about Samurai II: Dojo. 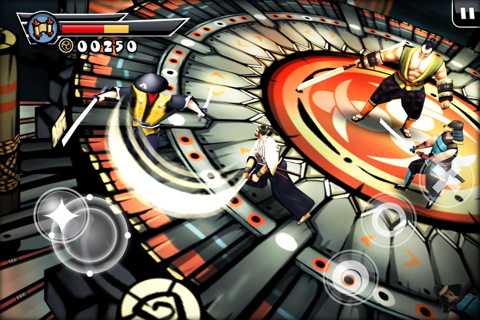 The difficulty of every level is insane. Insane. No way else to put it. Enemies attack you from all sides, your health pretty much remains the same, and even while dodging you can be hit. Upgrades are extremely far and few, and even on the lowest difficulty, it’s very difficult to make it past level 3. Seriously. I’ve been playing games for nearly my entire life. I can honestly say that this game is way harder than I expected. Granted, this game is NOWHERE near that difficult as those old classics like Battletoads or Ninja Gaiden, but dang, I just cannot get past level 2 without an insane amount of concentration… which I really shouldn’t be forced to do for an app.

It could be that there is no quick way to heal yourself and no matter what you are doing, you can be attacked. Your attacks will lock you in the animation until the attack finishes so it’s extremely difficult to time heavy attacks without taking damage.

A notable ‘awesome’ factor to Samurai II: Dojo is the ‘bullet time’ which eases the difficulty a bit. Whenever you enter this slowed down moment, your next attack on an enemy will ‘execute’ them. Cut their arms off, decapitate them or split them in half with all the bloody glory… it’s honestly the only way to make it through this game. Attack a weaker enemy until you randomly trigger the slowdown, then try and kill the tougher enemies.

However, despite ALL of the difficulty, this is a free app. What more can I honestly say? The sequel plays exactly the same except with larger levels, more structured enemy layouts, and it keeps the amazingly good graphics… so yeah, maybe paying $3 is worth it? Try your luck on this app if you are an avid gamer and if you believe you can beat this game.

Oh, and just to note, I am playing this game on an iPhone 3GS and I did not experience any lag or stuttering. There are quite a few comments in the AppStore about lag issues, freezing, and other bad bugs… however, without experiencing it for myself, I won’t calculate that into this app’s review score.

Try it out and see if you can get past level 2 on your first try!

Here is a video demo of the Samurai II:Dojo app on the iPhone