Take an adventure into a world of text RPGS! …Hey, come back… where are you going? No no, it’s not actually a pure text RPG! It’s a story book filled with illustrated scenes, combat, dice rolls, and facing down evil while making your own choices. Fighting Fantasy comes in multiple flavors: City of Thieves, Creature of Havoc, Citadel of Chaos, The Warlock of Firetop Mountain, and Deathtrap Dungeon. Released by Big Blue Bubble, Fighting Fantasy and all its stories are available for $2.99 each with each being universal apps.

Here we have a choose-your-own style story book with some upgrades for an RPG fan. Instead of just choosing from two or three options and turning to the specific pages when you choose, you get characters with gear and stats, inventory items, dice roll combat, and other systems that resemble something like Dungeons and Drago—hey wait, sit back down! Don’t walk away! 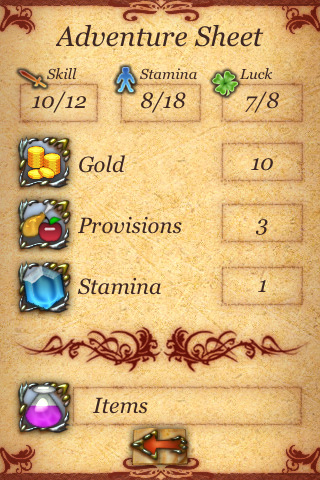 As it turns out, the Fighting Fantasy series is a pretty well established franchise. They have DS games, books, board games, and even magazines! I honestly had no clue beforehand, but this is a fascinating branch off D&D. The basic summary of each of these stories are, they are long, epic, and each one is surprisingly engaging.

Sure they aren’t as epic as a Harry Potter or Lord of the Rings book, but it’s still leagues above something like Twilight. The drawings in the story are excellently drawn, simple for what they are, and really convey the feeling of the story narration. But that’s not all that this app is made of. Fighting Fantasy brings us dice-based combat. 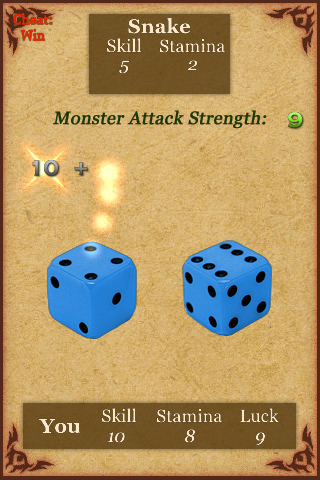 To be honest, I never liked dice based combat. It’s always completely reliant on pure chance and you will get extremely unlucky streaks that will cost you. Stats based on dice rolls do change the strategies you play out, but it also takes the control out of the player’s hands. Here in Fighting Fantasy, I still feel like it’s all out of my control but the combat sequences and skill use go by somewhat painlessly. Consider that a success.

My personal favorite of the series is The Warlock of Firetop Mountain. Some of the images in that story are so intense, so disturbing, that the story started showing elements of pure horror as I got wrapped up into it… then again, it was also the first game I played in this series, so maybe that’s why it had to most impact on me. All the stories are great regardless however.

I would love some smaller improvements however. Dice rolls feel slow and clunky. I would rather see a much faster, near instant result. Also, some paths you take end with extremely unfair dead ends that come up extremely far into a story branch. It is very difficult to know where you messed up so sometimes if you aren’t playing a story line all in one day, you will forget what options you selected the last playthrough and will fall back into yet another dead end. It took me a full week to finish a single story of Fighting Fantasy… but if that tells you anything, I still played the game series for about a full month. That’s staying power.