Mini Cannon is a physics based puzzle game in which you shoot bouncy rubber balls from a cannon. It was released by Gendai Games LLC for an iPhone, iPod Touch, and iPad and costs $0.99.

In each level there are essentially two separate objectives. Your primary objective is to land one of your bouncy balls into a metal bucket in such a fashion that it will not bounce back out. When you do so the red light on the outside of the bucket will turn green indicating that you have completed the necessary objective to advance to the next level. Your secondary objective is to collect bonus stars, which are placed throughout the vicinity of the level. 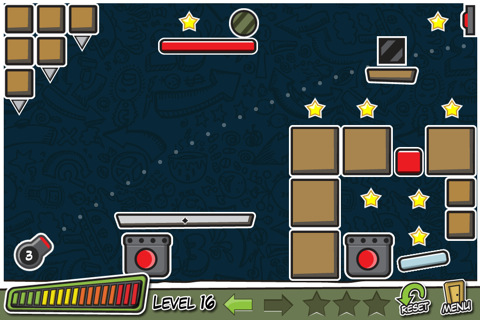 You collect the stars by having a ball pass through them. Depending on how many stars you collect, you are given a completion rating of between one and three stars. Each level is a 2-dimensional space of various blocks and other barriers for your balls to bounce on and around. In later levels, there are objects in each level, which may actually be moved or manipulated by shooting them. I recommend going through the brief tutorial before starting the game because there are a few tricks that will help you out. Namely, you are given the ability to control both the velocity and trajectory of your shots simply by touching and dragging your finger on the screen. At the beginning of a level, the number of shots you are given is indicated by a number on your cannon. The velocity of the current shot you are aiming is shown by your velocity indicator bar at the bottom of the screen and your trajectory is shown by a faint dotted line, which changes in response to how you move your finger across the screen. 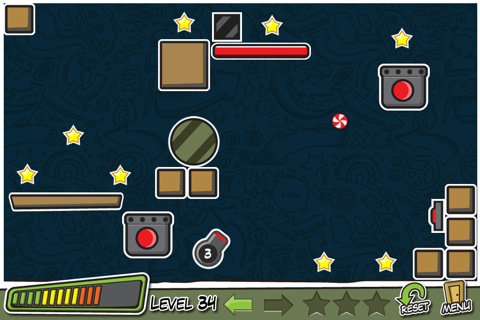 At first I was relatively unimpressed by Mini Cannon, but after playing a few levels and learning how to control my shots better, I got to levels that were both genuinely challenging and downright fun to play. Had I put the game down too early, I would have missed out on some of the more interesting complexities that Mini Cannon has to offer. This being said, you still need to be on the physics puzzle game bandwagon to have any interest in this app.