In Cavernous, an iPhone game, you are one of a team of two cave bats who has awakened one night to find that all of your gems are missing! Determined to get them all back, you and your partner begin a quest into the cavernous depths of your cave. It was released by Samuramu and works with an iPhone, iPod Touch, and iPad. It is 50% off for a limited time New Year’s special at $0.99.

In each level you are tasked with gobbling up insects and the like by flying over them. You and your partner work as a tag team by taking turns launching one another from a seesaw. This back and forth team effort requires a good sense of timing if you are going to devour any insects. 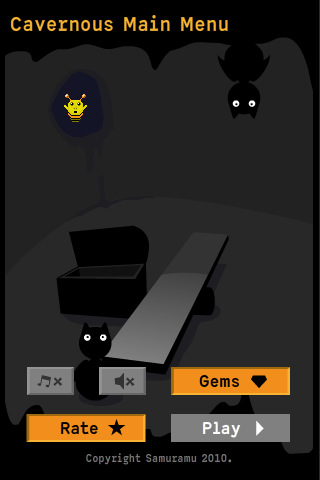 The bugs come in swarms and you are rated based on the percentage of the swarm you are able to eat. Letting anything pass deducts from your overall health and also results in a disappointed comment from you or your partner. As you go deeper into the cave, new types of bugs are introduced by instructions on the screen telling you in not so many words what to expect.

Given enough success in your nighttime hunt you will eventually begin to find insects flying by, carrying your beloved gems. Do not let them fly past, however, unless you want to see your chance at a gem disappear into the night. At the end of each cave level, you will encounter a boss, who bears his hit points in the form of a health bar. Hit him enough times and you can advance to the next level. Some of the bugs, including the bosses, have the ability to shoot at you. Get caught standing still, and the shots will also deduct from your health bar. 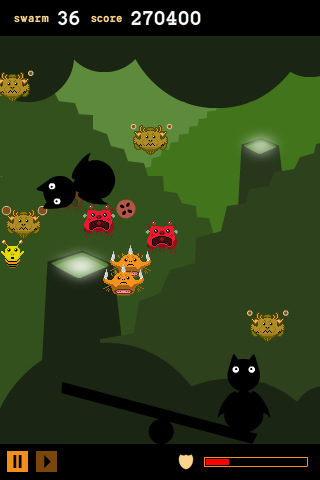 I found Cavernous to be a delightfully engaging game, albeit, a simple and repetitive one. One of its endearing qualities, aside from the ongoing partnership between the lovable bat silhouettes, is the challenge of switching them in time to catch all the pests flying by. Cavernous offers more than 50 levels for hours of entertainment.