A simple, kid-friendly app with bright colors and cheery design radiating from every pixel, Donut Dance – Tappi Bear is available for free at the App Store for a limited time. Usually $0.99, this is just one of the minigames available in the Tappi Bear All in 1 compilation pack, but developers Taplay are giving out this sweet little morsel for free.

A small and sugary bite of a game, Donut Dance is definitely more a minigame than full fledged gaming offering, but its short and sweet gameplay makes it easy to get addicted. I reviewed the Tappi Bear All in 1 pack awhile back, and Donut Dance is a nice cheap way to get a sense of whether or not the rest of the games are a worthwhile investment. 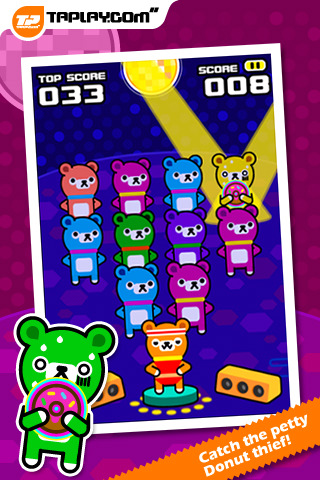 Donut Dance plays a lot like the traditional shell game. You start with a handful of disco fabulous bears and one oversized donut. When the game starts, the donut rapidly flits from bear to bear, and all you have to do is keep track of which bear it lands on at the end. Tap the correct bear, and you win, easy peasy. Initial levels are a piece of cake, but as you progress, more and more bears are added to the screen, and that donut moves FAST, so it doesn’t take long before you’ve entirely lost track of the action.

Although the game itself is basic at best, the loud signature graphics of the Tappi Bear series are what keep you coming back. Visually, the game is quite brilliant, brimming with crisp, bright, and engaging cartoon graphics. The cutesy style is a little bit like psychedelic Hello Kitty, but the artwork is all super-polished and nicely presented. It’s the kind of candy-colored, bold, iconic style you find plastered all over Asian schoolkids, so it certainly won’t be for everyone, but it’s undeniably distinct and very consistent. 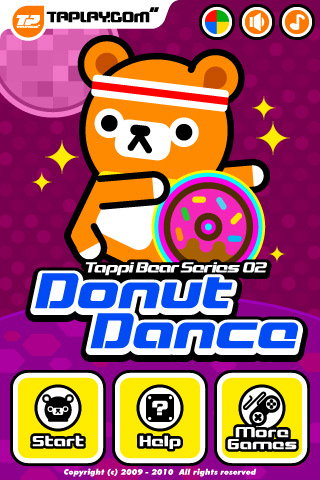 Because the gameplay and controls are about as simple as you can get, the visuals are definitely the strongest thing going for the game. The sound is fine, but while the music isn’t especially obnoxious, it’s also very short and gets repetitive very, very quickly. Unless you love the bears, there’s not a whole lot else going for the game besides some basic Game Center integration.

Ultimately, Donut Dance is a very pretty appetizer, not a main entree. It’s probably not something you’d want to pay for, but as a free game, it’s exceptionally polished and professional. There’s not nearly enough to keep your attention for long stretches, but it’s swell for a quick 2-minute diversion, and it’s good even for young kids, thanks to the brilliantly perky graphics and super-simple gameplay.