Hope you don’t get dizzy too easily. Armor Games is back with Shift 2, a black and white game for the iPhone that picks up where Shift left off, bringing with it a ton more fun flip style platform gaming insanity. If you haven’t played Shift on the iPhone before, it involves using black and white platforms that you can move in and out of using a combination of mirroring and flipping action. You are either a white colored character on a black background, or vice versa, a black colored character on a white background. In each level you have to reach an exit door, and to get there you have to creatively use a series of “shift” moves to find your way around a maze of black and white platforms as you run, jump and flip upside down. 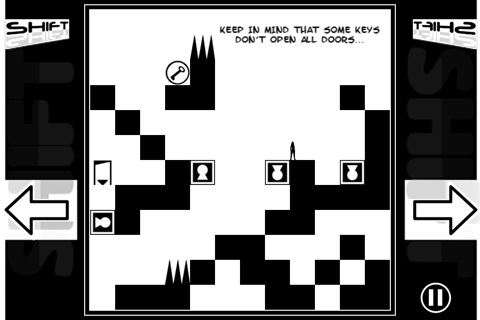 Shift 2 has added a rotational block. Touch it and the entire world rotates around opening up a new set of possibilities. There are also keys and keyholes, and checkered areas that you need to unlock and remove to get through levels. Speaking of levels, there are already 120 levels built into the game plus 30 bonus levels that can be unlocked with 34 achievements. Now with Shift 2 you also get scannable levels. You find QR bar codes you find in the press or online to unlock new special levels. 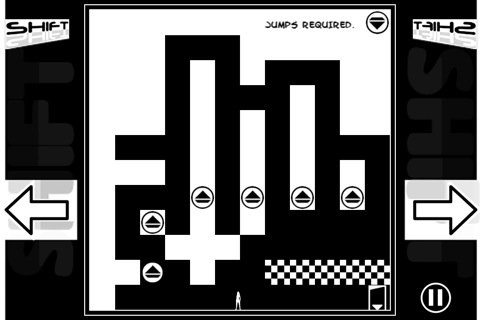 The game has a fun and playful onboard tutorial to get you warmed up as you play. The background music is fun but can get a little repetitive after a while. The jump button can be tricky to figure out at first. Gameplay is a bit slow and can feel slow until you get to the later levels in the game. In the more complex levels it take a lot of experimenting and thinking to find your way out.

Overall, Shift!:2 is a great sequel to the original mind bender. If you enjoyed the first version, Shift 2 is a no brainer.

Here is a video demo of the Shift!:2 app on the iPhone