Office Chaos is an intensely gratifying game that sets the player up in an office with one objective: Kill your co-workers before they get you. It was released by Ian MacLarty and Jon Kerney for an iPhone, iPod Touch, and iPad and it costs $0.99.

The game’s premise is that the OMGLOL virus has spread to your office computers and hypnotized the cubicle city. The game is a great play on reality as I am sure everyone with experience working in an cubed office environment has at times felt as if they were surrounded by suffocating figures that were once human but then mutated into zombies. 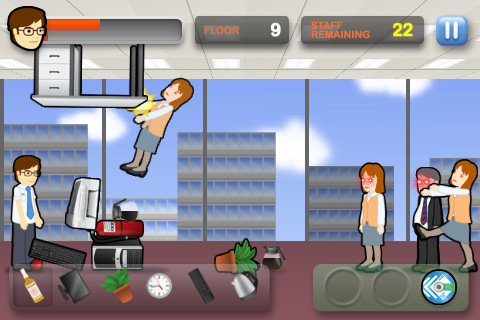 In Office Chaos, you are the IT worker in your office and they are all coming to get you. In your defense you have just about everything in the office at your disposal to hurl at the possessed office workers. You start at floor 10 and make your way down as you fight off surges of deranged workers. As they march toward you they shoot lasers from their eyes and you can either duck or shield yourself with the objects you throw at them. Their lasers can cut through your weapons so you have to be quick and keep them coming. 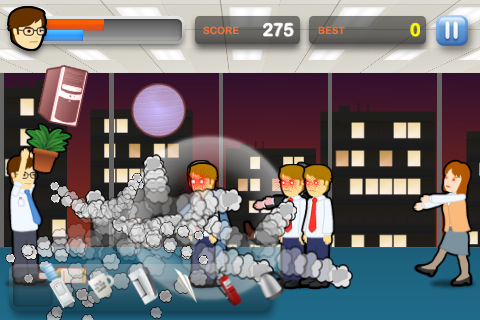 Your “weapons” include a coffeemaker, banana, computer monitor, fax machine, refrigerator, rolling chair, and just about everything else you would find in an office. You control the distance and trajectory of your throw by the line you trace on the screen. If the zombie-like workers get too close, you can start punching them. The game’s difficulty is split into 3 modes: Helpdesk, Sys Admin, and Senior Engineer. As the game wears on you can gain anti-virus software and install it in order to put an end to the chaos once and for all. In the upper right corner you can keep track of how many staff members you have left to eliminate and what floor you are on.

Office Chaos is a great game to play not only to get out the frustrations that must mount from working in an office environment, but because killing a red-eyed creature advancing on you with a fax machine is so satisfying.