Flying Hamster is an arcade style app game with which you get to fly through the air shooting mutated animals before they shoot you. The game was released by The Game Atelier and is compatible with an iPhone, iPod Touch, and iPad. At $3.99, Flying Hamster is on the expensive side but in its defense, it is an adventurous and fun-filled game.

Your hamster flies through six different domains ranging from the desert to the ocean and in each place there are both obstacles and prizes. When you fly over the sea there is a bear that throws fish at you, when you fly through the desert penguins shoot umbrellas at you, there are cats that throw balls of yarn at you, and when you are flying over a forest there is a cow that shoots its udder milk at you. 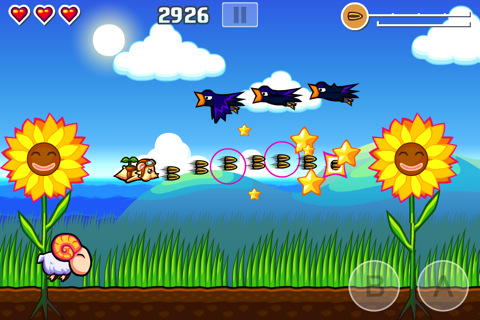 You come with an endless supply of pellets to shoot out but every once in awhile you fly over an object with a touch me sticker that gives you extra shooting capabilities which range from beer to bees to berries. The specialty bullets eventually run out and soon enough you are back to your basic ammo. At the end of every section is a boss that you have to take down and the feat is far from easy. The strength that the bosses carry is quantified in a green bar at the bottom of the screen and as you start firing bullets at them you can watch as it depletes. 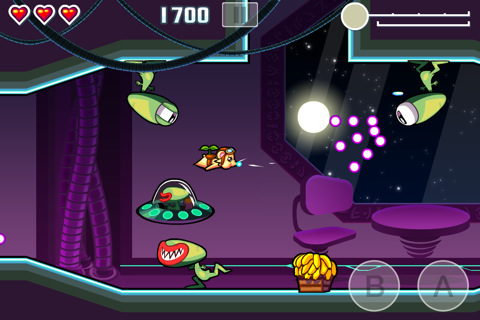 Most of the time you loose a life or two trying to take the bosses out because they have multiple ways to assault you. The controls for Flying Hamster are uncomplicated and easy to get the hang of. The hamster flies at a normal pace without you touching the screen but if you want to speed up, slow down, reverse, or move up or down, all you have to do is move your finger across the screen in the general direction you want the hamster’s path to be.

Flying Hamster is truly a ridiculous app. Penguins using umbrellas as weapons and cows shooting deadly udder milk does not make a lot of sense but the controls are intuitive and your adversaries are hysterical which is reason enough to give the game a try.