Of all the RPG branches, Action-RPGs are my favorite. That is a game where you basically battle in real time but you still have to manage your stats, replace equipment, and gain new skills. Oblivion, Fable, Fallout 3, Borderlands (to a lesser extent), and even the World of Warcraft follow this gameplay style and they are my favorites. Saying that, I really went into Rimelands with high hopes and high anticipation. Did Rimelands meet my expectations? Brought to us by Crescent Moon Games LLC, Rimelands is available as a universal app for $1.99.

Sometimes, in the middle of playing an app, an update is released. It’s really rare for big giant game-changing updates to ever come and completely change my opinion of an app, but man, this one did it. Rimeland’s latest update at the time of writing is 1.2 and it fixes one of biggest complaints I had about this app. 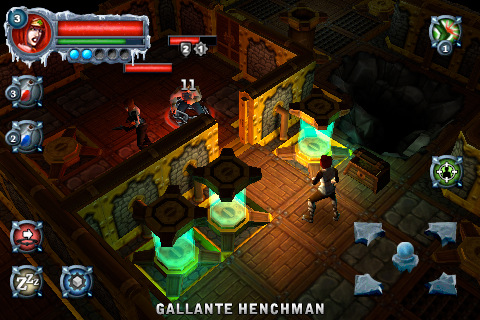 Simply put, the pacing is now forgiving. Before, the enemies came at you with unbelievable power. Because the game doesn’t really allow much freedom for grinding or gaining extra levels through miscellaneous quests along with story quests, enemies would be able to kill you in 3 hits by the time you entered the second dungeon of the game. Now, the early enemies are MUCH more realistic in terms of matching your level.

You play the game by using on-screen controls. Arrow Keys you push to move on the screen and several action commands. You can switch from enemy to enemy with a button tap rather than having to tap the enemy itself, nap to skip your turn but gain mana, or use potions and special attacks. Rimelands has two different paces: Real-time and Turn based. While running around, you move freely and will regenerate health and mana very quickly; when an enemy attacks you however, it becomes a strategy board game of sorts. You move one space at a time and you can strategize positioning, distance, and angles. You attack by rolling dice and for each skull you get, the more damage it will deal. After you attack, your opponent/s then get their turn to roll dice and try to kill you. 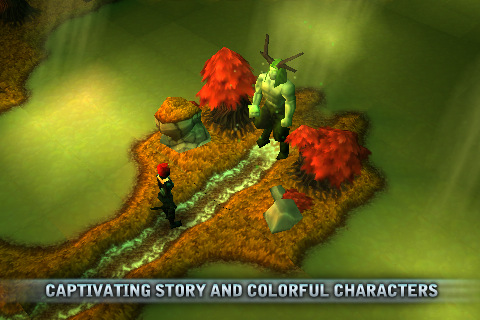 Rimelands gives you 3 character classes to play under based on what weapon you choose: Swords, Guns, or Magic. Swords, known as the Barbarian class, gives you big melee attack boosts and special skills like a battle charge that moves your character immediately into melee range and deal out an attack. Guns, known as the Assassin class, make your long range gun attack more useful with skills that stun enemies, silence them, or take a nice chunk out of their hp. Finally, we have Magic, aka. Shaman class, which has some of the most powerful attacks in the game, relies heavily on your set 5 orbs of mana. The game plays much like Fable in which you will always be able to switch from melee to gun to magic with a single button press and thanks to the turn-based battle system, it couldn’t be any easier to use.

Upgrading equipment comes from loot and dozens of treasures in every dungeon. You have a crafting ability to make new equipment, but they tend to quickly become obsolete for your level long before you can gather enough materials for them. The heart and soul of the game comes from leveling your class and your abilities. The story is ignorable. Some of the dialog can drag and some missions have nothing to do with the story (which is fine and standard with most RPGs).

There is, however, a couple of things I must mention. There are some major loading screens during the game. To move to the map screen for selecting levels, you must wait for a loading screen. After that, you select the area you want to go to and then wait for a loading screen. Once you are on the map, you have no idea what direction you are supposed to move in and there is a large chance you will exit the map from being unaware of which direction the game wants you to move in and thus you are set back into another loading screen. Once that’s done, you return to the map screen, repeat, add annoyed sound. Then, I got really far into the game, possibly the ending, and the game locked me in the room. I defeated an extremely tough boss battle and got the title weapon, the Hammer of Thor, and then I couldn’t do anything further than that. The door I believe should have been unlocked cannot be opened and I’m stuck. Oh well right? Game over?

Graphics are great, music is great, but honestly, I ignored them for the most part since I got absorbed into the gameplay. Yes, I replayed the game 3 times, once with each class and I had fun during each of those times. This is a really strong entry from Crescent Moon Games.

The overall package of Rimelands is an extremely solid action RPG experience and despite a couple of issues, I can honestly say that it’s one of my favorites. The game is lots of fun action and rewarding level ups, but the ending bug and loading screens really push my opinion. There is no trial for this one and it’s a $5 game… but honestly, from this last update patch (which, by the way, increased the score of this game from a 2.5), I’m willing to bet that fixes are coming and it is still one of the best RPGs I’ve played on the iPhone. Play this one, especially if you like games like Fable or Oblivion.

Here is a video demo of the Rimelands: Hammer of Thor app on the iPhone