It’s always hard to describe something you’ve almost never seen. This is essentially Breakout, the old arcade game, enhanced by platforming elements similar to Super Mario Bros. Move through a world filled with holes and death pits and destroy the colorful blocks without falling in. Released by Drömsynt, Squareball is available on the iPhone, iPod touch, and iPad for $0.99 with a Lite alternative.

Retro is the latest craze in today’s app environment. Most of the time, it’s not a creative choice, it’s an efficiency issue. No need for heavy graphics to manage, no need for an artist to create backgrounds and props, just make some giant pixels and color them! Genius! But in truth, Squareball (in both name and concept) just works so well in this Pong art style. They add a visual flair to each level by giving them a 3D perspective view so it looks almost like you are viewing a city from above watching this crazy white block bouncing off their walls. 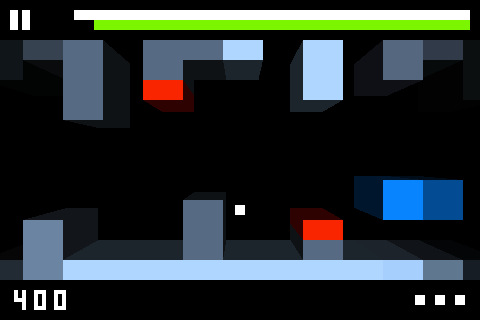 So how did the combination of Platforming and Breakout mix? We have nostalgia tickling music and sound effects, 20 stages with 5 different worlds, tons of different obstacle designs, and 3 modes of gameplay: Story, Challenge, and Endless. You can control your block with tilt or touch options, and the user interface is extremely simple. The basic goal is also simple: Destroy all the green blocks to complete a stage and destroy the other colored blocks to increase your total score. Squareball’s highscore system is integrated with OpenFeint so that covers motivation to play. 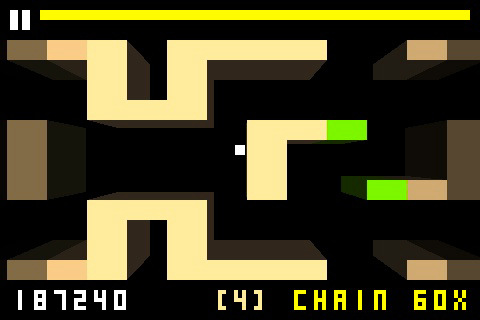 Altogether, I really enjoyed this game. Squareball is a rare game to experience because simplistic awesomeness doesn’t come around very often. I have experienced some crashing which forced me to replay some levels, so I really hope that gets patched up soon since I really want to recommend this app for everyone to try.

There is a Lite version so please check it out for your own good. Nostalgia is growing up with the audience so soon, grid-pixel art games will lose their appeal sooner or later. Let’s join the bandwagon and support Squareball so we can spread the idea of awesome combinations! Maybe in the future… Tetris shooters… Chess RPGs… who knows? Squareballs unleashed my creativity and imagination!

Sample the free version of Squareball on your iPhone.