Supastar puts you in the many misadventures of a cute Star that combats evil, flies through the air, falls into volcanoes, and rides a buggy! This is literally EVERY distance game I have ever played and I mean that in a good way. Experience the Released by eBattalion, Supastar is available on the iPhone, iPod touch, and iPad for $1.99.

Supastar gives you 6 different distance-style game styles. If you’ve ever read my reviews of Doodle Dash!, Save Betsy, Cave Run, Rabbit Run PRO, or Pig Shot or if you have ever played Robot Unicorn Attack or Doodle Jump, then this app should be well into your comfort zone. Now take that and add some cute characters, almost Japanese style humor, and compile it into one app, you’ll have Supastar; a monstrous app that I seriously think is hardcore competition against all the apps I listed in this paragraph. 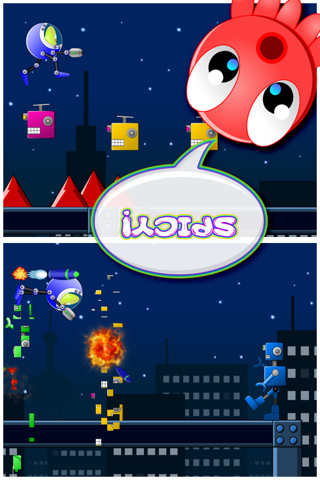 Supastar has 6 game modes to play:

Asteroid Jump – Jump and auto-bounce off platforms with rocket packs, wrapping around the edges, and break away platforms. Doodle Jump with, dare I say, cuter graphics. 4/5 for the overly sensitive controls. Asteroid Jump is also featured as its own stand-alone app in the AppStore for $0.99.

Action Robot – Jump, fly, and roll through armies of robots. Fire your flamethrower and laser gun as you smash through a futuristic world. You automatically move forward so your job is to avoid obstacles and stay alive. 5/5 for its fun and frantic gameplay style and for the flamethrower… awesome.

Cloud Flyer – You fly straight into the sky but you will lose momentum and start falling back to earth. Collect coins to give yourself a nice boost back up and the goal, if you haven’t guessed yet, is to collect coins and get as high up into the sky as possible. 4.5/5 because it’s simple and challenging though it can become a bit boring after a few times.

Buggy Dash – Here we have the Robot Unicorn style running double-jumping, dashing game. There are two flaws with this version: No warning of incoming obstacles and no Erasure music. Boo. 2/5 because I don’t ever feel like replaying this mode. I really want it to feel like Robot Unicorn Attack. At least use one Erasure song! 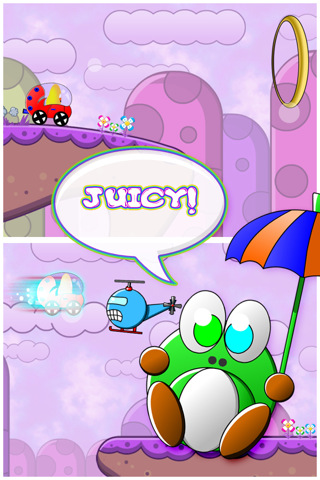 Elevator Drop – A tough balancing game where our Star friend is in a ball and he has to balance and drop onto constantly rising platforms. The top and bottom of the screen are instant death traps so you have to carefully drop and wait for the right time to stay in the middle of the screen for the longest amount of time. 1/5 because the rolling around is way too difficult to control and the sensitivity cannot be adjusted. I honestly hate this one because of how hard it is. The lava and the spikes at the top and bottom of the screen are just too close together so you can’t see platforms fast enough to react most of the time. Touch controls are sketchy.

Danger Dive – You slowly sink downwards into the abyss of the ocean and you must bounce off soft cushions and avoid pointy hexagons ocean rocks. Enemies, obstacles, and other challenges stand in your way. 5/5 for its easy to understand but difficult to master gameplay and for the cute star in a bubble. That’s just adorable.

Supastar is an excellent compilation and I want all readers to pick it up if you have EVER downloaded any distance-race style game app. This app at least deserves to be tried for its variety. It’s $1.99 for 6 different games. That’s a steal!