Wind-up toy battles featuring Abraham Lincoln, Edgar Allen Poe, and Genghis Khan VS robots, aliens, and mutants. That is all I have to say. Tin Town is available by Jovian Minds, for $0.99 on the iPhone and iPod touch, and $2.99 for the iPad.

I don’t know how much awesome I can handle before my brain explodes. This is like Civilization 4 meets Toy Story. This is a concept so ridiculous that I just have to ask why this wasn’t done before. Turn based strategy has never looked so mentally confusing and yet it exists. awesome. 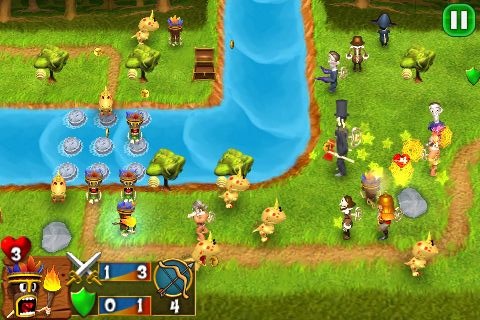 Play as ‘God’ and control wind-up toy versions of famous historical figures. Tap a unit to see where it can walk to and destroy the enemy hive that will constantly respawn enemy units to beat a stage. Level up characters to unlock new attacks and protect your hive, or in this case, toybox. You can knock enemy units into stage hazards like rivers and whatnot, and, to my surprise, a small army of Abe Lincolns with double axe strikes and William Shakespeares acting as archer support can be amazingly powerful against an army of boxing glove wearing cupcakes. I’m not on drugs, I swear.

Controls are ok, though the straight on view with no camera controls means you will hit the wrong boxes, you will accidentally take back moves while trying to select other units, and you will feel a bit hindered. You cannot select multiple units to move at the same time so individually moving units will feel a bit limited and the game runs on a square grid rather than hexagonal, which means you are pretty limited in terms of strategy. The art is unique, but in game the 3D really gets lost in the backgrounds. I kind of wished for big cell-shaded cartoony characters rather than this Toy Story for the SNES looking graphics style. 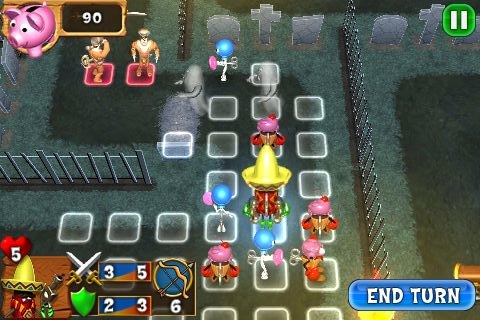 Motivation proves to be the main lacking element of Trouble in Tin Town however. Without a real rewards system like other games, highscore leaderboard, or lowest turn count achievements, this app is severely limited and doesn’t help push the game. For now though, you can enjoy this app as it is similar to those Fire Emblem games but without the story substance or Japanese anime graphics. Maybe try Tin Town out if you are interested in mind-bending surrealism in your apps.