Hey, another “first app” release. Welcome to the world of lumberjack robots of pure evil! You are Jeremy Ash and you are a Dennis The Menace/Bart Simpson fusion child with a slingshot. Time to put a smack down on evil forest destroying annoyances. Released by Arctic Empire Inc, Forest Frenzy is available on the iPhone, iPod touch, and iPad for $0.99.

Pull the slingshot back and fire. That is pretty much the entire app, not that anything is wrong with that. Enemies come from the top of the screen at varying speeds and with different abilities and it’s up to you to knock them down before they get to the bottom of the screen where they will destroy our precious tress. Environmentalism aside, the graphics for this app are darn good. I know this sounds weird, but the trees you are sitting on are extremely pretty. Enemies are extremely well designed with wonderful cellshaded shading and amazingly detailed appearances. I really like the look and feel of the art style, especially later in the game when you start meeting Jack-O-Lantern Grim Reapers and their awesomely drawn sprites. 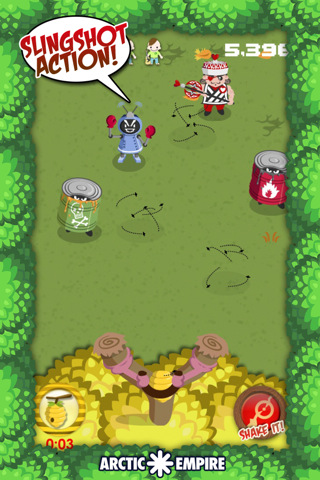 You can collect different ammunition during each level with a temporary amount of time to use them. Boulders that roll through enemies, beehives that leave a lasting damage area that hits other enemies that walk into the bees, or even watermelon slices that spread out like a fan for maximum spread damage. They really spice up the gameplay and help out a lot.

Still, there are some things missing from Forest Frenzy. I would have really appreciated a way to level up my sling shot after a few levels. Shot speed, reload time, size, ammo timer increases, or maybe even a way to launch traps onto the field to help out during bigger swarms? Maybe a story mode with the well done comic-style art that was provided at the beginning of the game? Establishing a story is nice and all, but I would have really liked to see a progression with logical enemies for each story development. 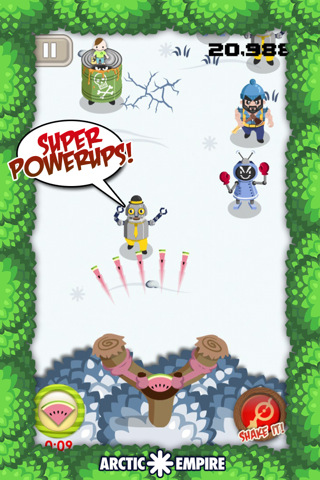 Forest Frenzy isn’t going to change the face of apps forever or anything, but it is a solid game with lots of potential for growth. Right now, it feels a dry at points and can be boring after you hit level 20 and literally the only thing that changes is you see one or two new enemies. Meh.

Maybe a gallery mode to see what enemies you’ve killed and to have the ability to see them up close? A store to change your standard shot into different stuff? More powerups, more enemies, more environments besides just a change of seasons, and some RPG elements would really push Forest Frenzy into a must have. As it is now, I would definitely say try this app out for the art so you can support this up and comer development group.