There’s something so very uplifting about banjo music and I can’t think of a better soundtrack to complement Reckless Racing. Reckless Racing is the phenomenally enticing 3D top down life-like offroad racing game from Electronic Arts. Now when it comes to racing games, I’ll be the first to admit that one or two big names dominate the console market and nothing else can really compare. On the iPhone racing games normally have been remakes of Console games and while not too shabby, there isn’t really any sort of wow factor there. Reckless Racing is probably the first of its kind in the iPhone racing game genre. It combines really fun gameplay, original mobile design and graphics, online multiplayer racing, and an uplifting soundtrack to bring it all together. An iPad version of Reckless Racing is also available which sells separately for $4.99 in the App Store. 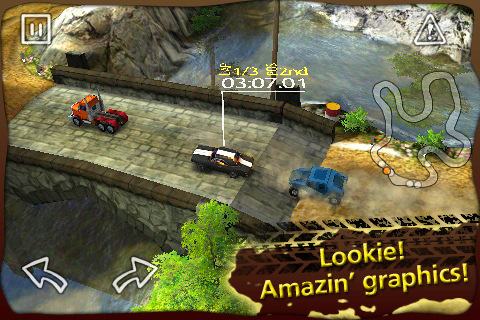 One of the most vital pieces to a racing game, especially on a touch based device like the iPhone is its controls. Get that one piece right and you are more than 80% there. The game should make you forget you’re playing a game and put you in the driver’s seat, and that’s when the fun begins. Reckless Racing has that down to a science. You can pick one of the 5 control options that best fits your style, ranging from full wheel steering, tank steering, standard steering all the way down to tilt steering. No matter which one you choose, it just plain works. Personally I prefer the full wheel steering which gives you control over the entire car.

The graphic engine in Reckless Racing produces remarkably realistic 3D roads, objects, cars, and races. You see things from top down with enough angle to give everything a helicopter view depth. Your car kicks up dirt as you peel out and drift around corners. You can go off some parts of the map and cut through corners, even get air jumping off ramps. If you die or go too far off you’ll re-spawn. You’ll be amazed at how much detail has gone into the level design. The dirt covered road maps are meticulously brought to life with real life objets like street signs, trees, electrical posts, bins, cones, rivers, rocks, mountains, dividers, bridges, homes and more. Combine that with fluid dynamic camera angles and an array of sound effects and you’ll believe you are actually living in that world. Sound effects of revving engines, donuts on the gravel and hitting various obstacles add more realism. The banjo music is icing on the cake. 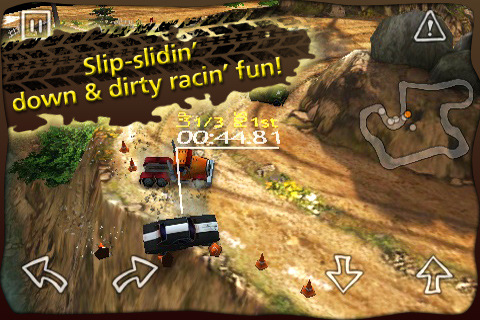 You can play single player in either beginner or advanced mode. Pick from one of 6 car/driver combos to race and even a couple funny extras if you want to race as a boss or granny. Play in either the dirt rally where you have 10 stages to complete plus 4 extra stages for more fun. Two other game modes are Hot Lap and Delivery. Finally you can play Reckless Racing head to head against other players in online multiplayer mode.

After you’ve finished the advanced stages, you’ll be ready to take on the next challenge, real life users. Here you pick a server, pick a screen name, create or enter a room, and join a race. If a race is already in progress you can hang out and you’ll be notified when the next race is ready to start. There’s a basic chat built in too. When racing in Multiplayer mode, you race against up to 3 other users. It can be difficult to know which is your car at the start of the race since your car color is randomly changed around, but you’ll figure it out pretty quickly. The people in the MP game rooms are generally experts and very competitive. One thing that is annoying here is that the host of a game can just leave and end the race which happened a few times when she/he was losing badly. It would be good if the game had a ranking or penalty system. Also waiting in the room for the race to start takes about 3 minutes. Why not just send a push notification when the race is ready?

Overall, Reckless Racing is a dream come true for any iPhone racing fan out there. If you haven’t played it before, you’re in for a treat. About as good as you will find right now in the App Store.