Space, the final front– er… nevermind; too nerdy. You are a cute little astronaut that is commanded by the PAL 900, an AI program, to evacuate the ship via a teleporter at the other side of the ship and then transverse across the moon. Can you control gravity well enough to guide our little friend all the way to safety? A first release from Nexus Game Studio, Gravonaut is available on the iPhone (3GS and 4), iPod touch (3rd and 4th gen) for $1.99.

Retro graphics of colorful pixels, moon and spaceship levels, and the music all compiles together into a very lovely old-school package. The environments are easy to read and it’s easy enough to tell what you should step on and what you should avoid like the plague. Not sure why the moon is covered in pillars, ceilings, and spikes, but it’s a nicely made design. 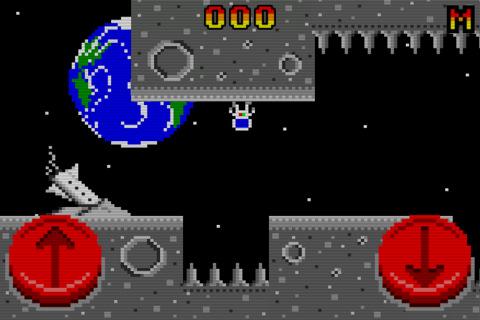 This is a gravity switching platforming game in the same light as Gravity Runner. You have two buttons; one up, the other down. I would have really liked it if they just had a ‘tap screen to toggle’ feature. I don’t need two giant red buttons at the bottom of the screen when all you need is just tapping the screen. You don’t have special powers to activate so it would have been very convenient. After switching directions, you cannot use this power again until you land on the floor or ceiling. You move automatically so it’s all about timing, patience, and constantly replaying the same level a dozen times to get all the way through.

Yes, level memorization is key yet again. Each level past the first one can only be completed after trial and error runs. You really have to memorize each and every pit, the timing of when to switch gravity, and it’s mostly impossible to predict the level’s layout, especially when they start expanding the stages vertically so you have to guess what’s coming from up and down the screen AND what’s coming from the right. The challenge is high but based on catching the player by surprise.

Overall, I liked Gravonaut, but not as much as other games. It is a solid game however and the retro look is well done and the 8-bit sounds are good. After the Gravity Runner app however, which is also a retro-based game, I have to wonder, do people associate gravity and platforming with retro now? I don’t get it. 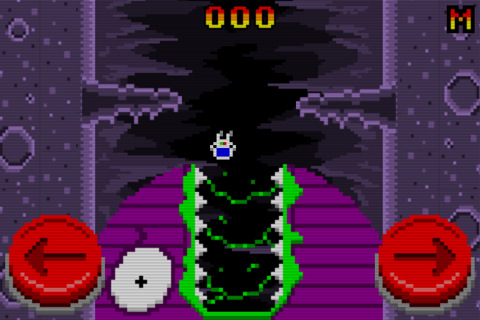 I recommend Gravonaut simply because its gameplay should be experienced just for the experience. The gravity control is interesting, but I fear some folks might hate the level design after a few dozen deaths. I would really love it if they implemented the PAL 900 as more of a “GLaDOS” character who taunts you or changes the environment around you to mess with your progress. How awesome would it be if by the end you float slowly towards its data bank and it’s trying to convince you that it has rethought it’s function and it wants to make friends? Space Odyssey parody in 8-bit awesomeness. Do it. It will be awesome.