Although this isn’t technically a game, you’ll probably spend more time playing with Akinator than most games I can think of. An iOS port of the free web toy, Akinator uses simple yes or no questions and an internet connection to guess pretty much any real or fictional character in existence. It’s pretty uncanny and way more fun that you would imagine a silly cartoon genie could be.

To start off, all you have to do is think of a character and press play. From there, Akinator, a smooth, mystical operator with a penchant for turbans and, occasionally, wild Hawaiian shirts, will get down to business, asking you basic questions like “Is your character a man?” or “Is your character real?” You have five different answer options: yes, no, I don’t know, probably, and probably not. Answer all of his questions truthfully, and in 20 questions, he’ll have a guess for you, and he’ll be right a frightening amount of the time. 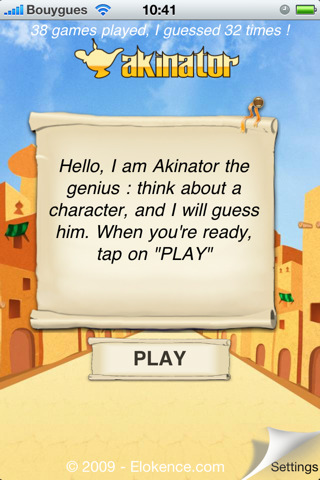 Just to give you an example of the kinds of characters Akinator has been able to identify, here’s a partial list of people it managed to guess for me: Marie Antoinette, Johnny Depp, Sandra Day O’Connor, Zeus, Barney the Purple Dinosaur, Mr. Clean, and myself. As you might expect, it’s a little rusty when it comes to lesser known characters, but you could still spend hours trying to stump this app and have a grand time doing it. The simple, completely intuitive interface makes Akinator a really great party trick, perfect for impressing your friends with the magic of technology. 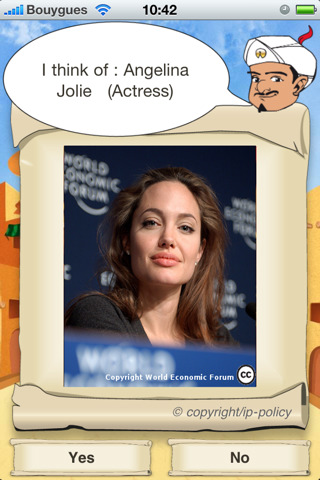 Unfortunately, Akinator also requires a dedicated internet connection to make his magic work, so unless you’re on WiFi or have a robust data plan, he may not be the genie for you. You might also balk at paying $1.99 for a service you could get for free on your computer, which is understandable, but I was both shocked and pleased at how incredibly addictive this app was. It’s the kind of thing you play with over and over again, so caught up in the sheer glee of it.

Note: Akinator is available on the iPhone, and also in an HD version (Akinator HD $1.99) for the iPad.