Thanks to particularly vicious winter storms, even sunny Florida has taken quite a beating this year, and the price of orange juice may go up due to severe citrus shortages. Moral of the story? We must protect the oranges! Coincidentally, this is also the core idea behind Cover Orange, an irrepressibly cheerful, physics-based puzzle game.

First thing to note, Cover Orange is a sweet and tangy helping of a whole lot of cute. The good guys are cute, the bad guys are cute, everything about the game is just impossibly cute, from the colorful environments to the jaunty soundtrack. If you have a problem with sugary sweet aesthetics, this might not be the game for you. 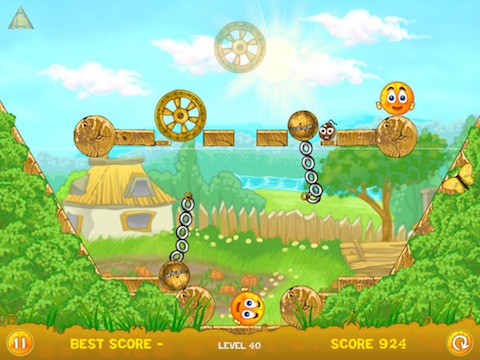 On the other hand, if you like well-constructed physics puzzles and need a new fix now that you’ve exhausted Cut the Rope and Angry Birds, Cover Orange is well worth a look, because beneath its saccharine exterior lies a series of very solid challenges.

Your goal, naturally, is to cover the oranges and protect them from the wicked storm cloud out to destroy with his poisonous rain. At the beginning of each level, you start with a limited number of items (barrels, boxes, etc.) that you can use to drop into the scene, and you can use these to get the oranges to safety. This might mean simply dropping a box in just the right place, or it might mean nudging an orange into motion with a wagon wheel and then carefully activating a series of levers to move it across the screen. 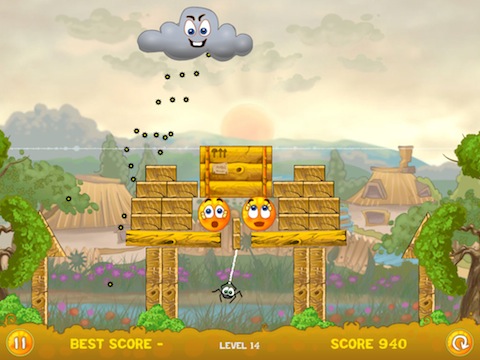 Thanks to a very robust and realistic physics engine, precision and timing matter are key, but rarely do they feel fussy. There’s usually only one “right” way to solve a puzzle, and once you’ve gotten the idea of what you’re supposed to do, it doesn’t usually take more than a few tries, and each level rarely takes more than 30 seconds to complete.

Unfortunately, the relative difficulty of the puzzles isn’t always a smooth progression, so you can be zipping through the levels, one after another, and them wham! You spend the next 20 minutes spitting and cursing because you just can’t get it. Of course, there’s a handy level skip button, so if your pride doesn’t get in the way, you always have an out, but it usually took me a good long while before I would ever admit defeat.

In almost all cases though, the game is the kind of snack-sized, pick-up-and-play addiction that can theoretically fill a stray minute or two, but it can also happily consume hours of your time, with Game Center integration ready to milk your attention span for every spare moment. The chipper animations and bright illustrations are Retina ready and appropriate for all ages, and in addition to being charming to look at, it’s ultimately just a really pleasant game to play and well worth the $0.99 download.