Take another trip back into the nostalgic world of side scrolling shooters. Earth Defense Force was a SNES game from all the way back in 1991. Those of you who played it were treated to one of the more memorable sidescroller shooters along with R-Type, Gradius, Phalanx, and Raiden. Now ported to the Apps world, how does this old classic stand up? Released by Jaleco LTD and DotEmu, Earth Defense Force is available for $1.99 on the iPhone 3GS/4, iPod touch 3rd gen/4th gen, and iPad.

Fire up Earth Defense Force and the graphics are… not from the original. No, instead you are placed in front of a coin-operated arcade machine. Start the game up and you get two options: Freeplay and Arcade. Freeplay gives you the chance to practice a stage without worrying about dying but you cannot unlock your weapon options. Arcade is the real deal here. You have a limited amount of continues before you have to start over again, you unlock new weapon types like the atomic or homing attacks. You can also unlock different levels of fire power and Option positions. For those of you unaware, Options are the names of those rotating turrets that float around your ship. 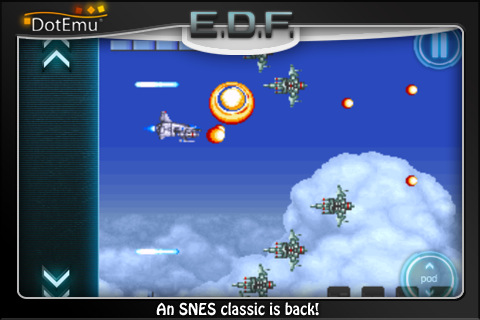 The graphics are immediately nostalgic and by that I mean they have not aged well. The pixilation and the blurry quality are justifiable though since this is a faithful port of the original SNES. Particles and bullets fly all over like the bullet hell games of today. The major difference is that there are more manageable bullet amounts but your entire ship acts as the hitbox for damage. If you so much as touch a bullet, it will take away 1 of your 4 shields. Run out of shields and you will lose a life. Lose 3 lives and its game over for you. If the graphics were a bit sharper, it would make dodging the bullets far easier.

The 90’s arcade soundtrack is a very nice touch but they also give you the option to play your own music library instead. A much appreciated touch since the TRON:Legacy soundtrack is hardcore while battling alien robots. Daft Punk for the win! 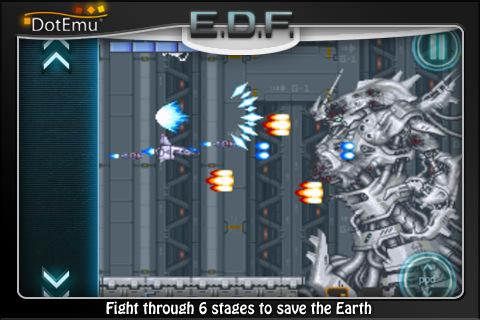 You have access to two different control schemes: Touch mode and V-Pad mode. The V-pad (joystick controls) has a slight delay in movements of up to down. This is usually due to a ‘center’ animation position for the pad and this stalls how quickly you can change directions. Since this can get you killed often, the touch controls are the better option. It’s extremely accurate and works great.

With the Game Center achievements and leaderboard, unlockable weapons, and fun gameplay, it makes me very sad that Earth Defense Force is only 6 stages long. Granted, it takes tons of skill just to make it past the first 2 levels, but 6 levels cut this app’s replay value. If they added more levels like so many other apps out in the AppStore, maybe with some unique levels, graphics, and some added weapons, Earth Defense Force can play two roles: a nostalgic thrill-ride and an upgraded and expanded universe.

Still, Earth Defense Force is excellent and should be played by anyone who enjoys sidescroller shooters. Maybe when they fix the V-Pad control scheme and expanded the game through some more patches, I can proclaim this game to be a full 5 star. Until then