NBA Jam is here for the iPhone. Electronic Arts have released the app for iOS which sells for $4.99 with 2 modes on the iPhone: Campaign and Instant Action. Controls use a combination of swipes and virtual d-pads. Review coming soon.

Here is the game’s description: 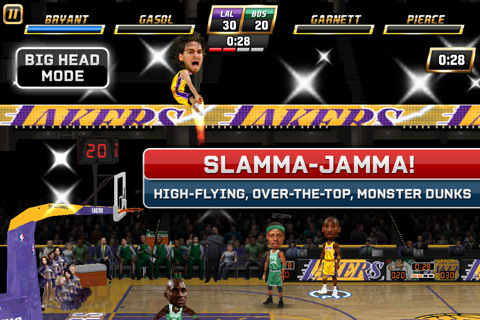 BOOMSHAKALAKA!!! NBA JAM is now ready to rock your iPhone or iPod touch with all the over-the-top, high-flying, 2-on-2 arcade basketball action just like you remember it – and like you’ve never seen before! So go to the hole. Go strong. Go for the monster jam. KABOOM!

HEAT UP ON iPHONE & iPOD TOUCH
Jam with all 30 NBA teams and your favorite NBA stars! Unlock legends from the classic arcade era like Scottie Pippen, Dennis Rodman, Dr. J, Scott Skiles, Karl Malone, Detleft Schrempf, and Danny Manning, plus some secret players you can only get on iPhone/iPod touch. Unlock outrageous cheats, too. You up for some “Big Head” action?

• Play Now – Select a team and jump right into the ballgame
• Classic Campaign – Defeat all other teams to win the championship, and unlock legends, hidden players and cheats 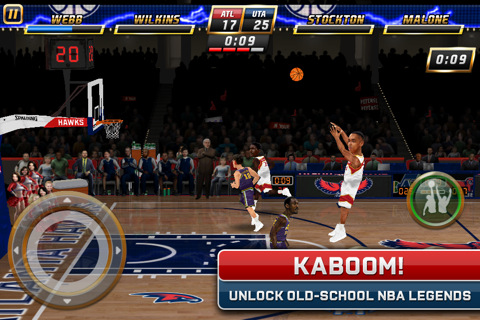 Also select from two different control schemes (D-Pad and gesture-based) and take advantage of the outstanding versatility of your iPhone/iPod touch. Is it the shoes?

YOU’RE ON FIRE!
If you’re from the Old School, you’ll feel the ‘90s nostalgia while you play the hottest new arcade sports game on the App Store. Featuring the voice of Tim Kitzrow (the original NBA JAM play-by-play announcer), you’ll hear all the classic catchphrases plus a few new ones recorded just for this game. This JAM is all about “boomshakalaka” -– and beyond!