Looking for a quick and fun arcade shooter app for your iPod touch or iPhone? Trinity interactive limited’s Blaster Tank is an excellent choice. Not only is Blaster Tank an app easy to learn and play, it will also not make you regret your purchase. The color is beautiful, and I love the amount of enemies that are crashing down while you blow everything up.

Throughout the game there will be enemy planes that will try to shoot at you with a variety of bullets and missles which you can either dodge or shoot. The concept of the game is very simple; get to the end of the level without getting blown up by these enemy planes. 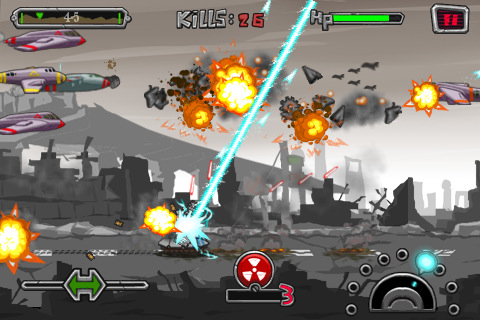 But what makes Blaster Tank more unique than your average dodge bullets and blow up the plane game is that in Blaster Tank you play from the perspective of a tank instead of planes. Think of it as the reverse of games like Raiden and Strikers 1945. Like Raiden and Strikers, you have more bullets coming out of your vehicle than bullets In a Ramboo movie. You have an incredibly strong bomb which you are limited to three, but can recharge overtime. And finally you can customize your vehicle’s weapons.

Customization is one of the unique factors that made me enjoy the game more. You spend currency which is rewarded to you at the end of each mission to purchase weaponry upgrades along with armor and sub weapons. Your tank’s weapons and the look of your armors change as you upgrade that specific utility, adding a simple yet fun appeal to Blaster Tank.

The color is also amazing. For a game with so much stuff blowing you up, Trinity Interactive Limited doesn’t disappoint. And with the amount of bullets, nukes, and crashing planes, Blaster Tank still runs very smooth with no crashes or visible bugs. 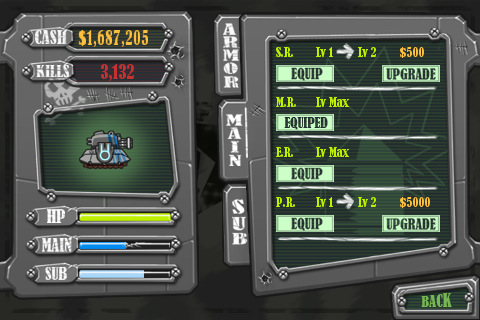 The only thing I wish Trinity Games would have done is to put some boss battles into the game. Instead we’re left with a giant danger notification, and what I think is a gauntlet of more enemies. The only difference in each stage is the background wallpaper and the amount of units flying around. There are also a lot of health power ups that are dropped by enemies. During the time I played, I really didn’t get hurt enough to use any of them. As much as this game is fun, I started to lose interest after I had finished purchasing everything.

Overall, Blaster Tank game gave me a bang for my buck so it is definitely worth the price. There is also a free version in the app store that you can try.