“Uh, hi, everybody. I’m Princess Evil, and I’m a tower defense villain. I really try not to be a bad guy, but between my name, my leather bikinis, and the fact my entire family is also evil, it’s like I can’t help myself, but, um, since I started coming to the meetings, I really feel like I could change. I’m starting to see that maybe I don’t have to base my life goals around my massive, but incompetent army. Maybe someday I could give up the whole wicked royalty lifestyle and go back to accounting school or something. Maybe.”

While sword and sorcery themes are pretty standard for tower defense games, I have to admit I wasn’t expecting bodacious barbarian babes as part of the package. Spires is a bite-sized, but epic in scope, defense game that offers an engaging twist on the genre norms. Rather than just throwing endless waves of generic baddies at you, the game features an actual plot, multiple environments, and three different protagonists, each with their own set of towers and unique playing style.

Gameplay should be familiar to anyone who has ever played a tower defense game in the past. You build towers, bad guys come, towers kill bad guys, rinse and repeat until all the bad guys are dead. Spires features a wide assortment of enemies, but it also provides a range of tower and upgrade options to help deal with them.

Each protagonist starts off with a small handful of towers, and while each set is unique, they generally include a tower with a fast, but weak ranged attack, a more powerful short-range attack, and another option good for taking out groups of enemies. There are a lot of slight variations, but these are your basic building blocks for attaining victory. 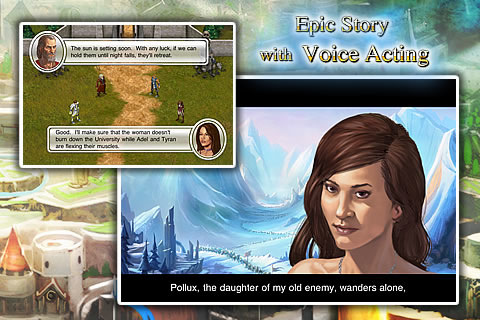 The baddies generally don’t travel along a strictly defined path, but their movements are predictable, and you can often place your towers in such a way as to create a clear route. As bad guys get tougher, you can upgrade towers in addition to building new ones to help ward off the attacks, but you’ll always have a limited amount of resources to spend. Killing enemies gets you more cash, but strategic tower placement is key.

The graphics feature pretty static screens for the cut scenes, but actual game graphics are of the grainy pixel sprite variety common to many TD games. While certainly not bad looking, the maps are of a size that require a fair amount of zooming in and out, which tends to affect the overall visual appeal. The sound and music, however, were all quite pleasant.

Unfortunately, as much as I wanted to like Spires, it was plagued with a host of technical issues that caused the game to freeze, crash, and just perform in awkward and unusual ways. When the game was working, I really enjoyed it, but the game crashed so often, it was hard to let myself get caught up in the action. On numerous occasions, I was forced to restart levels because of some unfortunate bug that caused the game to crash repeatedly, which was just terribly disappointing.

Story mode was also much shorter than I expected, but Survival, Puzzle, and something called Gauntlet mode help to up the replay value a bit, as well as Game Center integration. The weird cliffhanger ending and ad for a second game indicate that developers Prophetic Sky expect this to simply be the first of a series, but while I think there’s a lot of potential here, the crippling technical issues of the first game need to be resolved if there’s ever going to be a sequel.