Much as I like surprises, some games should really come with a warning label. In the case of Bloons TD 4, the label ought to read something like, “Warning: this game may consume endless hours of your life and turn you into a complete and utter zombie. Approach with caution.” At this point, I think I’ve spent more time with this game than I have with several of my ex-boyfriends combined, and I say that in all seriousness.

Bloons Tower Defense 4 is one of the heavyweights of the genre, having been played millions upon millions of times since it was originally released as a free Flash game way back in 2009. Fans have been clamoring for an app version pretty much since the start, and now the weight is finally over. Creator Ninja Kiwi has teamed up with Digital Goldfish to bring Bloons’ signature clean and bold cartoon style to the iPhone with a ton of new content, a fresh touch interface, and a whole lot of balloons to pop. 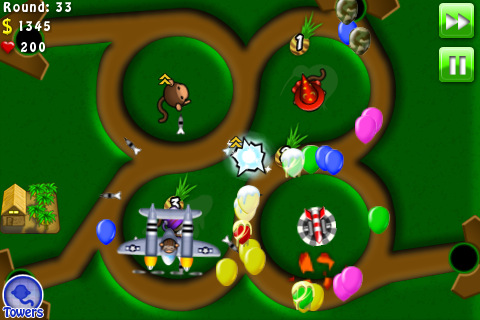 Veteran players should have no trouble adjusting to the touch interface, as it is set up essentially the same as the Flash version, with a few minor differences. There are no hotkeys, as you’d probably expect, but as with Bloons TD, you still have your good old monkey “towers” and a seemingly neverending stream of color-coded balloons traveling along a set path.

Newbies should note that each campaign is very long, usually consisting of dozens of waves of enemies, and later waves can take a lot longer to pop through than earlier ones. You have your choice of difficulty at the start, and completing campaigns not only unlocks new towers and upgrades, but it also unlocks new maps. I am not at all kidding when I say you could easily spend days, if not weeks playing this and only this game. 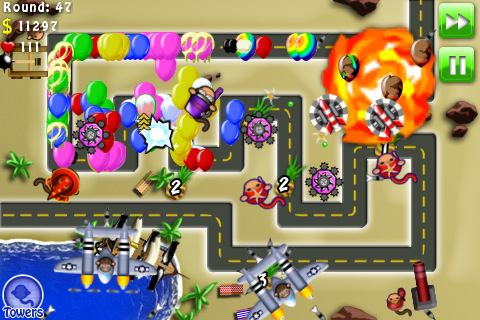 Because the game features the usual bajillion unlockable features and there is limited real estate on the screen, the tower menu can be hidden for a less cluttered experience. It’s still a tight fit, and tower placement can get a little awkward with your finger covering up half the screen, but it’s not much more fussy than working with a mouse.

Like any really good game, Bloons TD 4 is easy to learn, hard to master, but still a deeply satisfying experience at any level. If you’re sick of tower defense games, I can’t say I blame you, but this is the one to make an exception for. It won’t dazzle you with anything new, but it represents the genre at its finest, and it’s well worth the investment.