Paladog! by FazeCat is a role playing game starring a cute and cuddly dog available for the iPhone, iPod Touch, and the iPad. Unlike traditional RPGs, Paladog is like a game of tug of war and you move left and right while using your resources to generate new units and use your abilities to destroy an enemy generator. Despite the cute graphics Paladog is quite violent and bloody. The blood can be turned off but the violence cannot be changed. 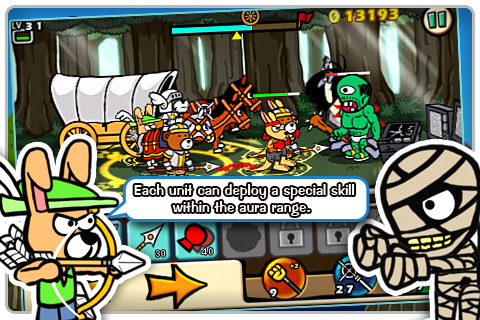 The controls for Paladog are simple but managing everything can be quite difficult. So you move your paladin left or right by holding the respective arrows. Meanwhile keeping track of your food and mana so you can create units and use one of three abilities. Your paladin has an aura that gives units a special ability or usually a stronger version of it when they are next to you or on the range of the aura. At the beginning you will have one type of unit and one ability to use but eventually you will get more. I suggest to spend your money on getting all eight units before upgrading them. As for your maces and rings, I recommend on getting them as enemy drops than buying them. Maces gives your paladin an attack such as ice magic or healing while your rings allows you to increase you maximum food level, health regeneration, etc. While managing your units and mana, you will lead your team to the generator and attack it until it runs out of health. At the end of a battle, you will see how long it took to beat that stage. Depending on how fast you beat it, the game will award you with one to three stars. There is a beat all the enemies they can send stage, an escort a carriage while beating the enemies stage, make units and defeat enemies until they reach the end stage, and finally a boss stage which plays like a normal stage but a boss monster will appear right after the generator gets destroyed. The controls are responsive except for when pressing the next button. Sometimes if you tap it, the game will not move on to the next page but you can press and hold the button and release to move on. There is no online or leadersboard for Paladog. FazeCat should include one since people can compete and see how fast they can beat a stage. 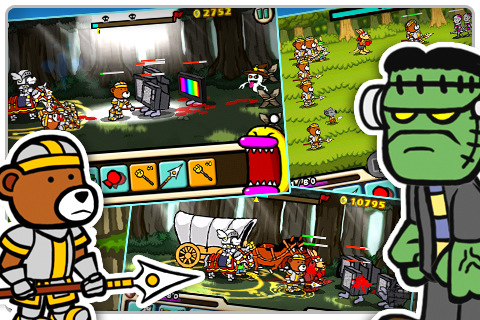 The graphics in Paladog are deceptively cute and detailed. There is also some pixelation but nothing too bad. The background does not suffer from this but they are reused and colored differently. The colors for Paladog are vibrant and usually fits the stage. When an something dies, you can see either its head falls off, lie motionless on the ground, etc. Blood is shown when something gets attacked but this can be turned off. Eventually the defeated enemies will fade away. The graphics are decent but the details are impressive.

The audio is good but a little too repetitive. At first the music got me psyched for battle though after a couple of stages it began to feel repetitive. The music is different in some stages yet more variety wouldn’t hurt. The sound effects are good. You can hear zombies moaning, your horse galloping, and other things.

Paladog sells for $1.99 in the iTunes App Store. There is also a free version but probably with some kind of limitation on it compared to the paid version. Replay value for this game is replaying a stage and trying to beat in a fast enough time to get three stars. The game is not a pick up and play type of game since Paladog can get repetitive for awhile then suddenly changes everything with a new monster and its special abilities. When this happens you will have to think of using a different tactic such as using a defensive unit and long range units to defeat it or using fully upgraded mice to overwhelm the opponent. Paladog references some things from movies and other things such as a Frankenstein monster, a televison monster that attacks with a ghost lady coming out of it and other things. I hope FazeCat will update more often and include new maps, enemies, maces, and rings. Despite the repetitiveness in some areas, Paladog is a good iPhone game that will keep you engaged.

Here is a video demo of the Paladog! app on the iPhone