Lowell Duke’s Helmet Hero: Head Trauma is platformer iPhone game filled with rock and roll and destruction. As you play the title character, everything in your way needs to be eliminated quickly and as loudly as possible. While taking a stroll through the forest or making your way through an ice cave, instead of jumping or climbing over those pesky obstacles in your way, break them apart with a chainsaw or snowblower. With forty-five stages and three different difficulty levels, Helmet Hero will challenge you to perfect your ability to destroy.

The game starts with a tutorial, teaching you how to use and switch your helmets, each mounted with a different tool. These helmets are lined up on the left side of the screen and are accessed with a tap. A chainsaw helmet takes down trees while a jackhammer helmet breaks apart piles of rock. Eventually you’ll have collected anything from a drill to a wrecking ball, depending on the area that you’re going through. After a few stages, you’ll be able to control the speed that you run at, allowing you to take down obstacles as slowly or quickly as you want. The faster you run as you destroy, the more points you’ll score. If you take down a certain number of obstacles in a row while running at the fastest speed, you’ll transform into Super Helmet Hero, an invincible Goliath that can take down anything. If Normal mode loses its ability to challenge you, go back and select Survival mode and run through a large obstacle course. 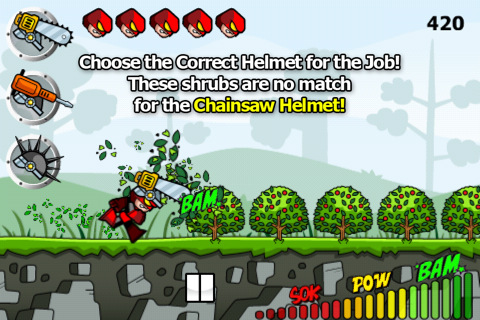 The game is very lively with bright colors, comic-book like artwork, and speech bubbles popping over Helmet Hero’s head every once in a while. Music is a head banging rock ensemble meant to make you feel tough and indestructible as you run through various harsh terrains. The game is easy to figure out and I didn’t experience any lag while playing. Initially, I didn’t enjoy playing the game because I hadn’t expected the weapons I needed to use to win the game to appear on the upper left hand corner of the screen. Accustomed to traditional formats of game play, I expected everything to be on the lower corners of the screen where they would be readily accessible. But I quickly adjusted and although I eventually warmed up to the game, I never got that sense of “This is so much fun!” Maybe it was because there was too much work involved switching between the helmets to be truly enjoyable. 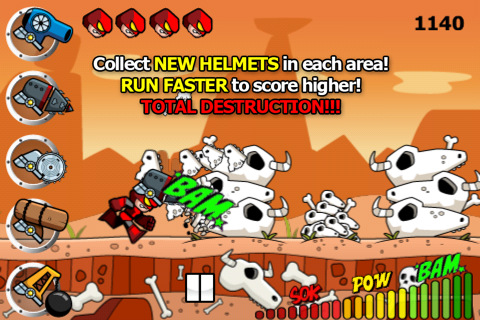 Overall, instead of losing myself in a fun, fast-paced game, I found myself thinking too much about how to play the game, making game play a chore rather than an experience. Helmet Hero is amusing for a short period of time, especially if you have destructive tendencies.