Although it sounds like some kind of international food blog, the Tasty Planet iPhone app from Dingo games is more like a mutated version of Katamari Damacy, starring an adorably ravenous blob of grey goo out to devour the world.

It’s all the fault of Mr. Clean and the Scrubbing Bubbles, really. If we weren’t so obsessed with having sparkling bathrooms, Tasty Planet’s silly plot of doom would never has been set in motion. Through a series of comic strip panels, we learn that scientists have created what they thought was the perfect bathroom cleaner, a little ball of goo that will automatically eat all dirt and bacteria. Of course, as bad luck would have it, it will also eat everything else it comes into contact with, and now it’s accidentally loose in the world! 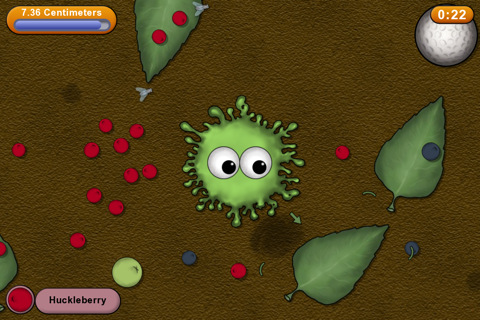 You control the grey goo on its ravenous quest. It will eat anything smaller than itself, and each bite makes it grow, but you must beware of larger creatures who can hurt you. You start off at the microscopic level, chowing down on bacteria and the like, but eventually you grow to eat bigger and bigger things until you’re a full-blown B-movie monster out to consume planets.

Gameplay is pretty simple, since each level is basically just a large field for you to navigate within. Like Katamari Damacy, there’s lots of randomly sized stuff scattered around for you to eat, but unlike Katamari, each level is very basic and limited in scope, with simple top-down 2D graphics instead of a 3D environment. Also, rather than going from tiny to huge within a single level, you grow gradually, but noticeably, slowly working your way through the levels. There is always a target size for you to grow to, and you can earn medals for fast times. If you manage to eat everything on the screen, more creatures will eventually appear so you can continue the feeding frenzy.

There are a number of different control schemes to select from, both touch and tilt, which I found very nice. In general, I preferred the touch controls (you have a choice between using your finger as a guide or using a joystick). The tilt controls were somewhat lacking in precision, but I really appreciated the calibration options that let you play both standing, sitting, and everything in-between. 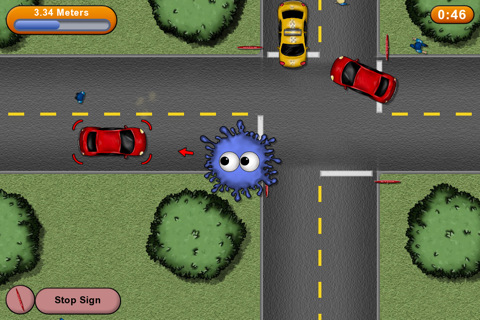 I liked the overall gameplay, but there were a few additional issues that kept nagging at me as I played. First, the cartoony graphics are really rather lame: bland environments and generic items that just fall flat when compared to the wacky, zany, colorful world of Katamari Damacy which Tasty Planet closely mimics. I wouldn’t call it an outright clone, but it’d be hard to deny the similarities. Second, the repetitive soundtrack started to corrode my braincells very quickly.

Overall, it’s a fun, if fairly basic game. It definitely taps into the satisfying “big thing eats a little thing” appeal of Katamari Damacy, but in the end, Tasty Planet definitely feels more like a poor man’s version of Katamari than an original game in its own right. Not especially inspired, but pleasant, and provides a fair amount of cheap replay value.