Super Ball Escape by Playlithium is an app for the iPhone, iPod Touch. You are a baby robot ball that is trying to escape from the evil company that has created you. You use tilt controls for this app. The goal is to get the ball to the teleporter. This is easier said than done since you can roll to your doom if you are not careful. If you do die, the game will send you back to the beginning of the stage but with the things you collected intact. Super Ball Escape is frustrating but fun. 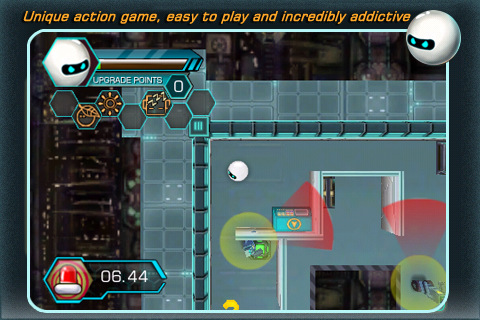 The tilt controls of Super Ball Escape is simple. You tilt the device in a direction and the robotic ball will go there. If you tilt in a direction in more or less a forty-five degree angle, the ball will move a bit faster. If you gently move your iDevice while it is flat, the ball will move slowly. Try not to rush to the finish since you can fall off the stage or get spotted by an enemy robot and you will get killed that way. When you are spotted by the enemy, it’s alarm will go off and will drain your life. You can roll away but I highly suggest to be stealthy rather than to risk dying and be sent back to the beginning of the level. There are powers that you can buy by collecting little robots. You can get an ability that can transform you into a trash can. As a trash can, you can hide from aggressive robots and can be carried by a cleaning robot to the trash area or something like that. Other upgrades include health regeneration and freezing. When you get an upgrade, it does not get to carried over to the next level. Super Ball Escape requires you to think about the abilities you should get rather than becoming an all powerful ball of destruction. At the end of a level, the game will tell you how many times you have died, number of enemies killed, alarms triggered, upgrade points you have, and how long it took you to finish the level. This app provides three training levels and some hints. The levels can be quite large and this can be frustrating since you have to watch out for enemies and try not to fall off and explode. The controls are responsive just try not to rush things. Super Ball Escape requires patience and determination. 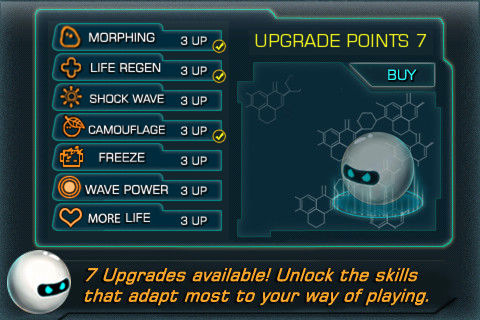 The graphics of this app are cartoony and charming. The background is dark and industrialized while the level itself is usually bright and maze-like. There is some pixelation but the graphics are mostly polished. Super Ball Escape’s style kind of reminds me of the Disney movie Wall-E.

The audio for this app is interesting. The music makes you feel like you are in a manufacturing plant. The sound effects are spot on such as the automatic doors opening and the alarms going off. The audio can be a bit repetitive but it fits the environment very well.

Super Ball Escape sells for $0.99 on iTunes. This game does not have an accurate resume ability since it will take you back to the beginning of the level despite whatever progress you have made. The replay value is trying to get a better time without triggering any alarms and dying. There is no leadersboard or online multiplayer. Super Ball Escape is a fun puzzle app that uses the tilt motion controls. Overall, I would recommend this game to people who likes games with stealth.