Released by Bluepepper Inc, Doodle Bouncing Star is a Distance platforming game where you can customize your character with premade decoration or your own hand drawn stuff! You too can play this app for absolutely free on your iPhone, iPod touch, or iPad! You can also purchase in-game currency in their Shop ranging from $0.99 to $9.99.

Making yourself standout is extremely difficult for a game app that uses two of the most overused elements of the AppStore: the “Doodle” art style, and the distance game platforming mechanic. Jumping games like these are a dime a dozen in the App Store. I’m already convinced that apps like these are just really easy to program and therefore people use it as a quick source of profit. So how does Doodle Bouncing Star make itself stand out? Drawing and a flexible player-character replacer. 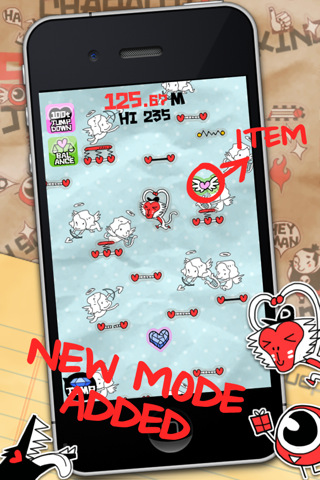 You can use almost any image you want and turn it into a character that you can use and decorate. Want to see yourself as a superman as you jump all over the place? Have you always wanted to see a UFO climb platforms? Who hasn’t wanted to see a bowl of ramen use its noodle legs to navigate around? Doodle Bouncing Star gives you the opportunity to use your friends’ pictures or any saved file from your photo library or use a brush and eraser to draw your own shapes. Besides that, they also give you a costume change shop where you can buy different characters of varying stats with gems. Gems can be gained in game but you can also purchase thousands of gems at a time by paying money.

Gameplay is affected by this purchase system and that’s unfortunate. It takes 300 gems each time you want to buy something. Characters, costume elements, and character selection slots (for your custom characters) have to be purchased. When you draw a character, it saves to a character slot, but you still have to pay for that slot to be selectable. What happens if you update the character then save again? You have to re-buy it. During gameplay, you pick up an average of 30-40 gems in about 5 minutes. I got back up to 300 gems eventually but that’s the problem with games like this. It’s grinding. 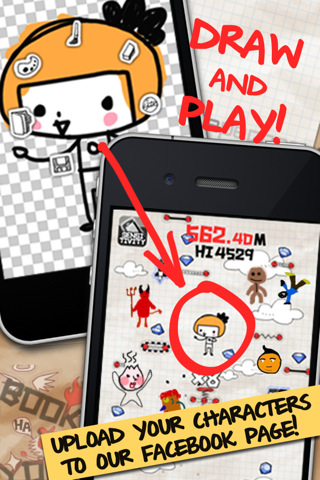 Remember that term from RPGs? Grinding by repeating boring tasks over and over so you can get to the fun parts of the game? Yeah, Doodle Bouncing Star is boring. The jumping only has so much entertainment. All but one or two powerups in the game will mess you up completely. Control reversal, increasing the sensitivity of your tilting of the iDevice, or even freezing that requires you to tap the screen to free yourself. The freezing ‘power-up’ is one of the worst because you are never ready to tap the screen. The game actually punishes you for tapping the screen in mid game. You see, tapping the screen causes you to do a very powerful jump. This jump can save you from dying and gives you an instant distance boost. The problem? It costs you gems. You know, the thing you were working so hard to grind? I didn’t notice this at first but I ended up spending two or three playthroughs of gems to jump around and this annoyed me greatly. You will avoid tapping the screen if you ever want to unlock something so the ice freezing is infuriating.

The actual gameplay has nothing to offer in terms of entertainment. You bounce around and hit random annoyances. There aren’t any enemies to shoot or anything like that so the only source of entertainment is the customizing of the characters, which you have to buy by playing the game or with your hard earned cash.

I didn’t have much of any fun with Doodle Bouncing Star and instead, I found myself slowly losing patience with its handling of money over user-friendliness. After I updated a character that I spent 300 gems on (I erased a stray pixel of white that I didn’t notice until I got in game), the game locked the character again and asked for another 300 gems which would require me to spend another 10 minutes grinding out without being able to play the character I just purchased, and I nearly threw my phone across the room. My really, really, expensive iPhone that I paid for with my hard earned cash. I wanted to imbed it into my wall and stab it with a pen. Then the app crashed.

Sample the free version of Doodle Bouncing Star on your iPhone.