UFO on Tape is an arcade style iPhone game where you are in hot pursuit of a UFO with your video camera trying everything in your power to keep the hovering craft in your sights. The game was released by Revolutionary Concepts for an iPhone, iPod Touch, and iPad and costs $0.99 and introduces yet another use for your built in gyroscope and accelerometer.

The game play in UFO on Tape is set up to simulate the player holding a camera. It is as if you are riding in the passenger seat of a car and you spot a UFO. You grab your recording device, point, zoom, and shoot. UFOs are said to move quickly and abruptly so the challenge when playing UFO on Tape is to follow the sudden movements of the spacecraft. In the upper right hand corner is a battery bar that depletes rapidly when you do not have the UFO in sight. The key to playing a successful game is to have the UFO on film for a long period of time. In the Settings section of the app you can customize the Sensitivity of the camera by choosing from 25, 50, 75, or 100. You can also invert the X/Y axes. UFO on Tape uses Game Center to chart the scores of users all over the world so it is easy to determine who is truly the best cameraperson. While “recording” you can touch the screen at any time to pause the game. 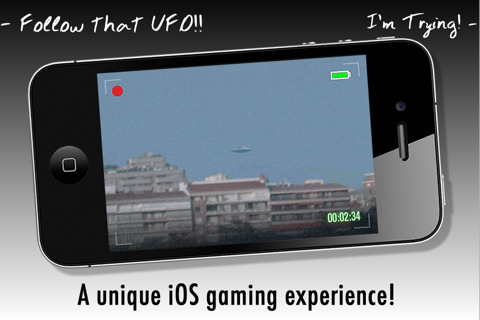 There are no levels and the only room for advancement is to increase the time you record the UFO. The lack of diversity and levels in the gameplay are a key reason for my ultimate dislike of the app. To be honest, after giving the game a few chances I put it down for good. UFO on Tape did nothing for me. It was frustrating and boring. The only redeeming quality was the concept of the game, which asks you to think about what you would do if you spotted a UFO. The concept is a sort of admission of the indubitable existence of intelligent life forms in the universe. Otherwise, I would not have even given the game a second thought.