Given that it’s an established staple of family fun, do you really need me to explain Boggle to you? Really? Well, all right, but I’ll make it quick. 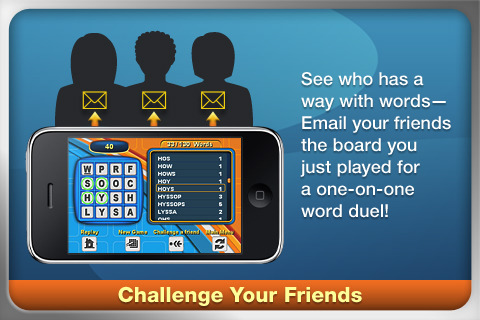 The Boggle app is pretty much just like the regular Boggle game. You shake the device to mix up the dice, and then you’re left with a grid full of random letters when the timer starts. Your goal is to make as many 3+ letter words as possible from the available letters by stringing together letters that are next to each other (you can go in any direction), and you can’t reuse the same letter twice. Valid words get you points, and while bigger words get you more points, it’s a question of strategy whether you go for quality or quantity.

Despite being an older game, I was actually surprised at how responsive the controls were. You have a choice between swiping or tapping letters to spell out words, and in either case, the controls are reasonably sensitive. You can easily see if you’ve made a mistake, and the game will buzz if you accidentally enter a wrong word or a double.

Now, if you do make a mistake, the one thing that’s a little frustrating is correcting course. If you’re just off by a letter at the end, it’s not such a big deal, but erasing the entire string requires you to find and tap the first letter, which can get a little frantic. There are advantages and disadvantages to this system, so it’s neither good nor bad, but it can take a little getting used to.

Unlike standard Boggle, there are also two different modes of play here. There’s the oldie, but goodie Standard Mode, but there’s also a Challenge Mode that lets you tack on additional challenges, like a constantly changing board or a “Panic Flip” that completely resets the board every 20 seconds. These little extras are intended for Boggle veterans, and they add a surprising level of oomph to the experience. 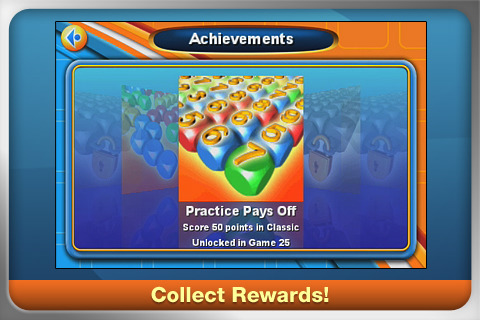 The only thing the game is really missing is a solid multiplayer aspect. You can challenge people via email to beat your high score in solo mode, but there’s no standard multiplayer Boggle, where you only get points if no one else has found your word, and there’s no online match system. You have the option of setting up a Self Scoring game, which just displays the screen and you can have people physically cluster around with some scrap paper, but it’s not ideal.

Still, all told, this is a surprisingly solid port of a physical board game that works really well. The graphics, while certainly not a key aspect, are clean and attractive, and while the sound gets a little annoying after awhile, the built in option to play your own music makes for a much more pleasant experience all around. Ultimately, it’s just Boggle, so it probably won’t leave you writhing on the floor in ecstasy, but for word game lovers, it’s a worthwhile buy.