Sad Princess is an action rpg with beat-em up qualities and it is for the iPhone, iPod Touch, and the iPad. The save the damsel in distress concept has been used many times and is still being used today. Perlo Games chose to do it differently by having the princess rescue the prince. You play as Princess Clover (another way of saying club) who goes out of her way to rescue the prince she loves from an evil queen.

For this app, you will use your thumbs to move, block, attack, collect and use items, etc. The controls can be a bit awkward to get adjusted to but will work out eventually. When you see an enemy just run up to it and press the attack button as much as you want to reduce its life bar. Doing combos will increase damage output, help charge up the blue gauge and may unlock a few achievements such as your first one hundred hit. The hit count will reset if you don’t land an attack fast enough. Killing an enemy will usually give money and or items and experience points. Leveling up will give skill points for you to choose what stat to increase. 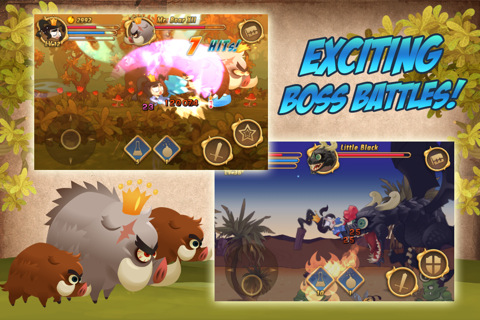 In order to get stronger weapons, you must have the matching level. Leveling up will restore your health bar to full. When you deal damage or receive it you will fill up a blue gauge. Sad mode can be activated when that bar is full and by tapping on the princess’ sparkling portrait. At the start of it, Princess Clover will use an attack that will damage all enemies in a large area. In sad mode, your attack range and damage is increased. When you get enough money, you can buy a pet to help you on your journey but you have to feed it to increase its stats and level. You can increase the strength of your weapon by using gems. There is a leadersboard for ranking and score.

The graphics for Sad Princess is sharp, colorful, and polished. Like what other people have said, this game reminds me of the cartoon “The Powerpuff Girls.” I think the graphics with a mix of old and new. The enemies are generic such as a slime, bee, wolves, etc. While organic enemies will fall and fade away when you beat them, things like a flamethrower will come apart first then disappear. The graphics are a bit repetitive but are nicely done. 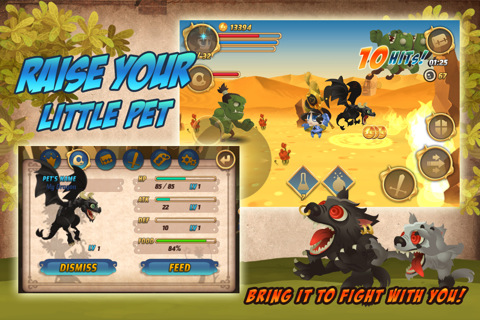 Sad Princess’ music is slow and calm despite the plot of the game. The music is repetitive but I didn’t have any problems with it. The sound effects is commonly used such as the slashing noises and landing hits. You can turn them up or down but will take a bit of your time since you have to tap the left or right arrows to increase or decrease the volume for the music and sound effects. The audio for Sad Princess is simple but nothing out of the ordinary.

Sad Princess is fifty percent off on iTunes at the time of this review. It is $0.99 at the moment. There is a free version if you want to give it a try. The game is hard after a certain point, with each stage the enemies will be stronger and can take more hits. It also requires a lot of coins to buy items and upgrades. You can use real money to get more coins if you want to avoid the hassle of going through so many enemies just to buy things. I chose to repeat a stage to get money, items, and exp. There is a survival mode where you start out at level one and carry a limited supply of items. You can replay the previous stage to get an S rank by beating it with a fast time which will reward you with a medal. Medals are used for the lottery to get random items. You need a great amount of coins to get medals, more powerful health and sadness potions, pets, gems, inventory upgrades, etc. I think Perlo Games should reduce the price for some items such as the first item bag upgrade from 32500 coins to maybe three to five thousand since it took me awhile just to save up ten thousand coins when I am already level 27. They should also have a stage select since you cannot replay stages like I would like. For example if you have a rank C on stage three but have finished stage six, you cannot go back to stages one through four but only stage five. So if you want to get an S rank for a stage, I highly suggest replaying a stage until you do and then move on. Sad Princess is an interesting game but might be a bit off putting for some people. I hope Perlo Games will address those problems to make it a better app.

Sample the free version of Sad Princess on your iPhone.