Simple name, simple game. Drop! is a colorful, happy, falling distance game. Tilt to dodge obstacles and damaging props while falling closer to the end of each stage. Explore different stages and keep your little parachute safe. With Game Center compatibility, Drop! is released by Applause Code and is available on the iPhone, iPod touch, and iPad for $0.99. This review is based on the iPhone 3GS version. This appears to be the first app by Applause Code, a Father-Son team project completed on their spare time.

Simplicity is underrated. As a fan of bombastic visual entertainment, even I can appreciate a smaller, easy going app like Drop! The trick here is that the game concentrates on just being what it is: A distance game. You tilt your iDevice to move from left to right. Obstacles usually force you to stay in the center of the screen until something spawns that pushes you to the sides to avoid crashing into it. You get 3 lives at default and each life is basically a health point. Get hit 3 times to fail the stage. If you manage to reach the end of a stage, you’ll get a high score and unlock the next environment. 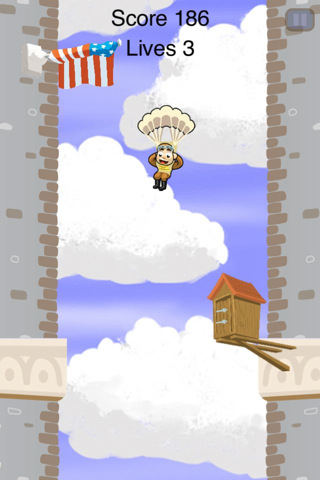 The art direction is solid. The main character and his parachute get lovely black outlines that give it stark contrast to the non-outlined environment objects. The background art is excellent with funny references like the frozen caveman in the ice stage. The interface on the main menu looks nice with lovely color gradients but the in-game text is a simple black font with a very PowerPoint feel to it.

That brings up the first and only real issue I ever came across in Drop! Because of the placement for the score and lives text, your character is hanging around the top 1/3rd of the screen. At faster speeds, this makes the game move extremely fast and yet your own movements are rather slow. The challenge is definitely there, but so is a taste of frustration from simple mistakes as not being able to predict an obstacle on time. I would love to just have a little bit more time to be able to see what’s coming. If the score and lives were given their own space at the very top of the screen, and placed out of the way, your character could get some more breathing room at the top of the screen.

Unlocking new stages require you finish a stage completely. This takes a while and while the game does play well, it’s still difficult. I barely unlocked Mojave Dusk level before I simply lost interest. It just takes too many tries, too much concentration, and too difficult a task to reach the end of each level just to see something new. You don’t have main character skins to change, and you can’t customize your parachute. I would love to see some unlockable costumes and items.

I really like the art for Drop! The gameplay is simple to learn and yet very challenging. Give this one a go and see how far you can fall safely. This is why I drive. It’s far less terribly dangerous.