Casual gaming powerhouse Big Fish Games is trying something a little different with Haunted Manor ~ Lord of the Mirrors. An eye-catching and spooky hidden object app for the iPhone and iPod Touch, Haunted Manor comes with all the gorgeous artwork and polished design details you’d expect from a professional port, but now you can play it on the iPhone for free. Sort of, not really due to in-app purchases.

Rather than dangle a free lite version to lure you in, the developers have decided to pull a quasi-freemium act. The entire game is available for free download, but unless you make they very hefty in-game purchase of $6.99, you only have access to the first few levels. It’s a little sneaky, to say the least, but to be fair, the free content gives you a decent taste of what the game is about. 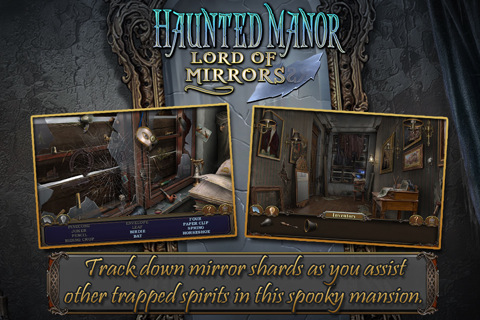 Whether you decide to buy or not, you’re probably going to find the story a bit on the cheesy side, but nobody really plays these for the plot, do they? One line summary? You are pitted against the Lord of Mirrors, an evil spirit who likes to trap people in his creepy mirror realm, populated by other creepsters he’s trapped over the years, and it’s up to your hidden object finding and light-puzzle solving skills to escape before it’s too late. Put like that, it sounds kinda lame, but the actual gameplay is more satisfying than the clunky writing.

Because these are mostly static images, they manage to pack in a ton of rich detail and moody atmosphere in the beautifully illustrated scenes. Each area has one or two different tasks for you to accomplish, most of them involving finding random objects in the room, but each room has a different layout, and there are frequently hotspots that take you into more detailed areas, like hidden cupboards and drawers that are like mini-levels unto themselves with their own sets of objects to locate. There is also the occasional mini-game or puzzle to solve, like simple jigsaws or memory games, a tad random but who cares? 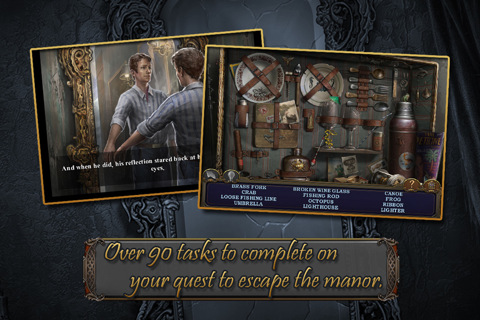 Although the full game offers quite a lot of gameplay, there are a few technical hang-ups that might give you pause before buying. The touch sensitivity is a little on the iffy side, and although you have the ability to pinch-zoom, a must in some scenes, the game has an annoying tendency to zoom out without prompting. The game also isn’t always so hot on giving adequate direction on what to do, and it can be a real pain to find key objects at times. For example, would you know what a lantern wick looked like out of context? Most objects aren’t quite so obscure, but there will be the occasional head-scratcher. If you get stuck, there are unlimited, slowly recharging hints, and there’s no real penalty for mis-tapping, although if you do it enough times, your screen will “crack”, obscuring your view for a few seconds.

Happily, you can try the game out for free before you make a decision, so you can check it out for yourself. I’d say that Haunted Manor ~ Lord of Mirrors isn’t the best hidden object game around, but what it lacks in narrative, it makes up for with loads of content and its dark, atmospheric illustrations. If you end up getting the full game, you should get a fair chunk of playtime out of it. Overall, it’s actually a very decent hidden-object game, and certainly worth a look for the free content, but that $6.99 price tag for the full game makes my inner cheapskate cringe. It’s nice, but not that nice.