I absolutely LOVED Big Pixel Studios’ Piyo Blocks games, so I was naturally excited for their latest app for the iPhone and iPod Touch, Land-a-Panda. Mostly I was hoping for more of their deliciously adorable art design, but the unusual gameplay had me intrigued as well, and I’m happy to report that despite dangerously high expectations, the game hasn’t disappointed me in the slightest.

It’s hard to go wrong when your game features lovestruck pandas, and Big Pixel Studios basically hit the cute motherlode with heroic Yang Guang and his lady love Tian Tian. Love makes you do the wacky, and in Yang Guang’s case, that means allowing himself to be being shot out of multiple cannons through a veritable labyrinth of floating, often moving obstacles to reach his plushy panda princess. 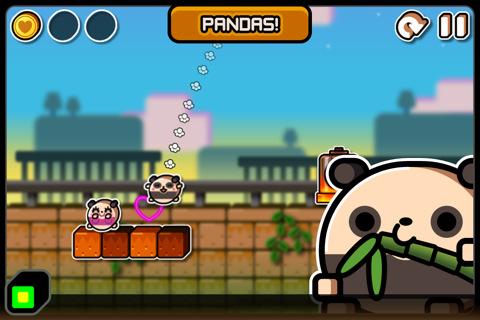 Gameplay, as I mentioned before, is unusual. It’s primarily a physics-based puzzler, where you employ your keen sense of timing to launch Yang Guang at precisely the right moment from cannon to cannon, but the way each level is structured makes it feel almost like a platformer, except with one-button controls. It may sound complicated, but once you get into each level, it’s actually very straightforward.

Early levels start off very gentle, practically linear as you automatically shoot from cannon to cannon, but as you progress, timing and strategy gradually become more of an issue, particularly if you want to pick up time bonuses for finishing quickly or collect all of the stars that are scattered throughout. It doesn’t take very long before levels start to present a significant brain challenge, with lots of moving and varied elements. 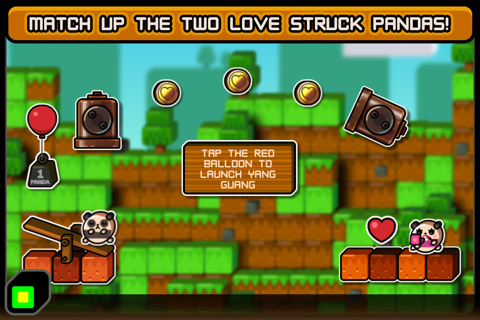 I was genuinely impressed by the thoughtfulness of the level designs, but I admit to being way more taken in by the soul-crushingly adorable HD graphics. Overall, the game just looks really, really good, it’s clean, colorful, and altogether charming. And the pandas themselves? The levels of cute radiating off of these little guys is dangerous to one’s mental health. It can reduce human speech into a series of ear-piercing squeals that only dogs can hear. If you are the kind of person who is susceptible to such wibbly-wobbly, cutesy-wootsy, “OMG I JUST WANT TO EAT THEM UP WITH A SPOON”-kind of charms, then consider yourself warned; you may NEED this game.

For everybody else, Land-a-Panda is still very much a worthwhile buy. Although the one-button gameplay is exceedingly simple to learn, the levels themselves are complex enough to keep your mind engaged, and there are a ton of them to work through. It took me all of 15 seconds to figure out how to play, and once I got past the initial tutorial levels, I found the gameplay very fun and satisfying. And at $0.99, it’s one heck of a bargain, so unless you’re a total meanie who can’t bear cute and cuddly, Land-a-Panda is something you ought to give a try.