When I first caught wind of brand new iPhone adventure game City of Secrets, all of my hopeful sensors started buzzing with excitement. It’s been my experience that classic point-and-click adventures go together with the iPhone app like chocolate and peanut butter; not everyone will care for the combination, but for a sizable few, it’s like manna from heaven. Naturally, I had to check it out.

In case there was any doubt, City of Secrets is a straight-up, old-school adventure game. The story features the adventures of Moles the mole (who pretty much looks and sounds exactly like Bob Hoskins) and his canine pal Rex as they explore the mildly sinister underground city of Poco Pane. Rex has been wrongfully imprisoned by the shady mayor, and it’s up to Moles to bust him out. This means talking to the colorful citizens of Poco Pane, collecting numerous random objects, and solving lots of puzzles. 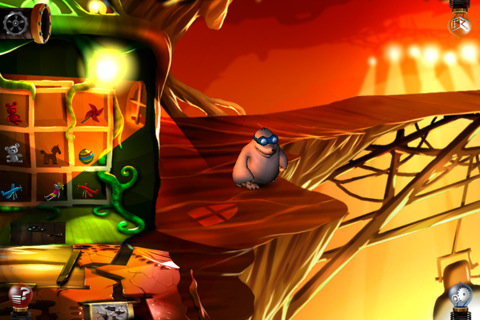 Let’s start with the good. First of all, the game looks utterly fantastic: gorgeous 2-D backgrounds combined with nicely rendered 2-D characters, tons of fun detail, a number of different crazy environments to explore. All in all, it’s a lot of very crisp and lovely eyecandy. The game is also fully voiced, and while not every performance is going to blow your socks off, the main characters, particularly Moles, are aces. From an audiovisual standpoint, City of Secrets is extremely impressive.

Slightly less successful are the puzzles, which aren’t actually that bad, but the solutions tend to feel a little too random to be actively satisfying. It can also be difficult to spot things in the occasionally dark scenes. The help system is set up in such a way that when you tap the button to uncover the scene’s often difficult to find hotspots, it also gives you a very blatant hint, which keeps you from ever getting stuck, but it’s a bit of a letdown if you’re trying to figure out the answer for yourself and were just looking for the door. 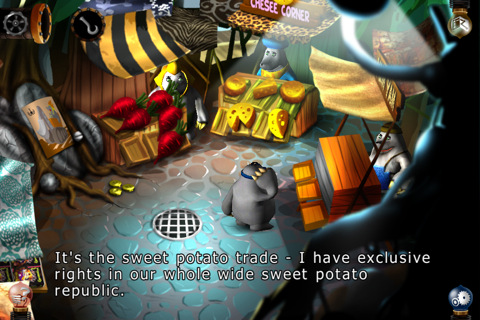 The biggest letdown, unfortunately, is the game’s writing, which struggles with humor and falls painfully flat in many cases. Snappy dialogue and a killer story are generally what make an adventure game successful, and in this case, the story and characters just come across as fairly bland and forgettable. To be fair, it’s not awful writing by any means, but it just tries too hard to be funny and ends up seeming rather forced and awkward instead.

Ultimately, City of Secrets is a very eye-catching and solid game, but the story and characters are too forgettable for this to become a true adventure classic. Pleasant enough for an afternoon’s distraction, and definitely well worth the $0.99 price tag, just don’t expect another Monkey Island.

Sample the free version of City of Secrets on your iPhone.

This 3rd Party App is available at the Apple iTunes AppStore. Browse the full list of all AppStore apps filed under the AppStore category.
Download City of Secrets at iTunes App Store
Price: $1.99
Developer: Website
AppSafari review of City of Secrets was written by Tracy Yonemoto on April 14th, 2011 and categorized under Adventure, App Store, Games. Page viewed 6403 times, 2 so far today. Need help on using these apps? Please read the Help Page.

2 Comments to “City of Secrets”