An intriguing mix of old-school 8-bit adventure aesthetics, cutting edge touch screen innovation and ironic hipster chic, Superbrothers: Sword and Sworcery EP is a highly enjoyable RPG app on the iPhone & iPad that comes close to being a “multimedia happening” than a game. And if that sounds a little to pretentious and cool for you, then bail out from this review now as it’s only going to get worse.

“Superbrothers: Sword & Sworcery EP is what you would get if you mixed 3 parts classic adventure game with 1 part Rock and Roll, 1 part pagan rituals and 1 part psychedelic drugs. It’s a beautiful, dreamy little place inside your iPhone.” says Kris Piotrowski, creative director at the award-winning independent videogame studio Capy. 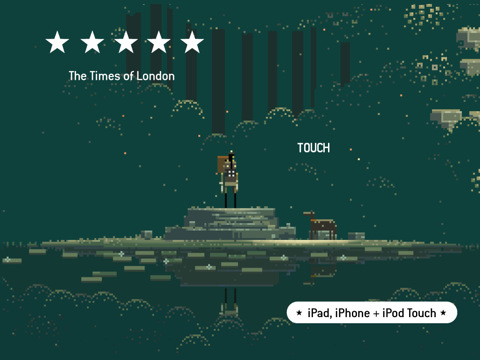 The creative force behind the game is Superbrothers, one of those irritatingly trendy art collectives. I’ve not see what they look like but I can almost feel their beards through their work. Legendary Toronto musician Jim Guthrie (a solo artist, member of Royal City, and co-founder of Three Gut Records) is responsible for the soundtrack, which is at times haunting and at times epic. It’s an integral part of the game and the (for want of a better word) soundscapes that you explore are carefully thought out and highly enjoyable to listen to. Unsurprisingly the soundtrack is available to purchase … on vinyl.

Everything about this games screams indie cool and it’s probably best played alongside a flat white coffee and an ironic trucker cap. The last thing that traded so heavily in ironic retro-cool as this was the incredible Scott Pilgrim vs the World and it comes as no surprise that this also hails from Canada (5.4 million hits for the phrase “it’s not just the weather that’s cooler in Canada” implies there is something good going on up that … and that journalists should find a new phrase).

But more important than its obvious cool credentials is that it is fun. The gameplay is highly enjoyable – despite it clearly trading in nostalgia as a currency. I found myself marvelling at the soundtrack, delighted with the visuals and laughing at various plot points and lines. The “battle” scenes were engaging without being really challenging, the puzzles made enough sense to keep me stimulated and the general feel of wandering reminded me of the many happy hours I wasted playing Zelda on the SNES. 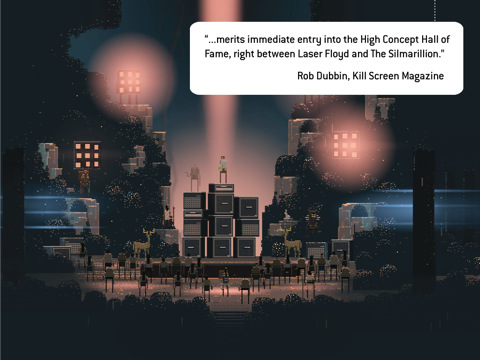 So … is this for you? Well despite the enjoyment to be gained from playing the game, it’s no Angry Birds/Tiny Wings/Doodle Jump and is far from a straight forward gaming experience. It’s also not a pick up and play game and you’ll want to sit for good periods of time to interact with the world the team has created. If you can say “interactive avant-garde iPad gaming” with a straight face then you’ll want to give Superbrothers: Sword and Sworcery EP a go.

Here is a video demo of the Superbrothers: Sword & Sworcery EP app on the iPhone