Released by Creative Apparatus, Spellitz is available for the iPhone, iPod Touch, and iPad for $1.99 in the App Store. Spellitz is a spelling game puzzler. Use the ability to swap letters around to create words for points. You can rotate your iDevice to help form new word possibilities, form words within other words for bonus points, and multiplier bonuses.

Spellitz plays with a few finger taps. Words that are possible are highlighted and words that exist within words are highlighted brightly in blue. In order to gather points, you need to create the most complex series of words as possible so your score can increase. You can double tap single letters to delete it, you can swap letters with other letters for the cost of 25 points, and you can double tap highlighted words to delete the entire word to gain a score based on the length of the word and whether the word has a blue highlight or not. 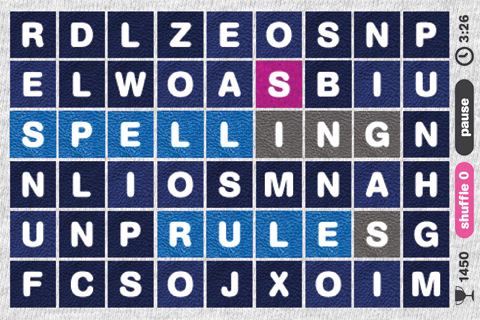 Swapping actually rarely works the way it should. When you ‘swap’ a letter, the entire row will actually move downwards because as it turns out, you aren’t swapping, your destroying. The one you want to replace is swapped but the entire row moves downwards because the replacement -explodes-. So the counter intuitive swap system is just made useless by shifting… what’s left? 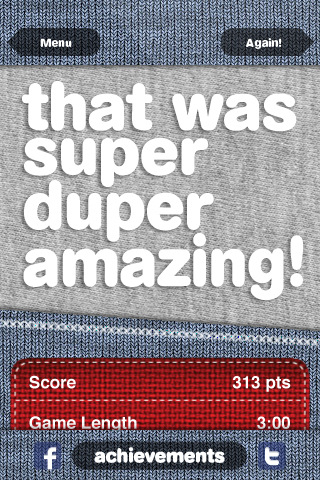 You have access to a button that shuffles the field which can help rack up some more points and the constant turning of the iPhone was a bit challenging… if only because I really don’t want to drop it. The graphics like the background textures are very crisp and oddly appropriate. General interface and their choice of fonts work really well and overall, the entire app is self-explanatory, which is always a good thing, but in the end, it’s a simple game with little to offer in terms of incentive or lasting appeal, but it does look pretty.

This just wasn’t my kind of app and I did not have much fun in it. I can, however, appreciate the hard work put into it as it is clear from the start that they tried to do something unique here with the letter swaps. Don’t take this review as absolute, it’s just my opinion and I just happened to not like it.