If you love ironic fashion, fixies, and kerning, then you’re going to love Vetica, a new iPhone/iPod Touch game. Combining a love for retro arcade gaming with general font geekery, Vetica is the kind of experience that hipster designers will absolutely adore, and the rest of us will still find amusing.

Even if you’re not a hipster, you’ll still enjoy this clever take on old-school gaming. Like Warblade or any of the other fifteen bajillion vertical shooters available in the App Store, Vetica has a familiar mechanic that you’ve probably seen a lot of: touch and drag gameplay, lots of enemies, minimal graphics. But here’s the twist: instead of the popular retro pixel graphic approach, Vetica uses font instead. 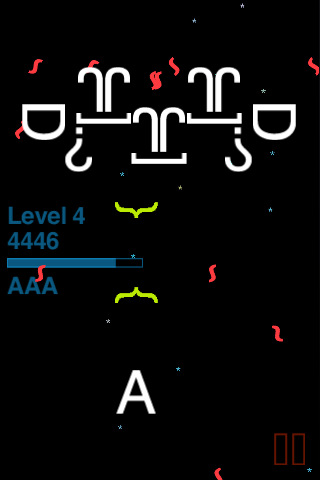 Your ship? It’s a pure white capital A floating in the black void of space, and you face down enemies in the form of deadly V’s, whirling S’s, etc. Your basic weapon shoots periods, and upgrades come in the form of brackets and the like. There are even these magnificent boss battles where you’re pitted against these crazy ASCII art constructions, and when you destroy an enemy, they explode into an asterisk cloud of typographical carnage. It’s a bizarre concept, but it works surprisingly well.

The overall design scheme does a stupendous job of preserving that abstracted feel of early games, but the use of font gives it a very clean and modern update. Combined with the appropriately synth-heavy background music, Vetica feel very much like an old game made new again. The look of the game is very spare, with minimal use of color or flashy effects, which I would expect from a game dedicated to Helvetica, and I found it very visually appealing.

As a vertical shooter, it’s still not half bad. There are three difficulty levels to choose from: Normal, Hard, and It’s Not Fair, and they’re all balanced according to your preferred level of challenge. It’s clear that the developers were having fun with making new enemies, as there are several different types, and each comes with its own weapon and movement pattern. The boss battles in particular were very well designed and fun and engaging to play. There are also high score tables and a number of awards to chase down if you really want to milk every second of enjoyment from the game. 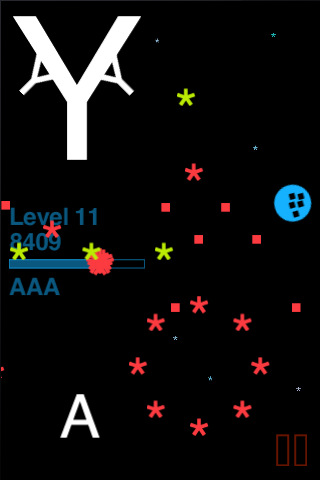 Admittedly, when you strip away all the fancy design aspects, Vetica is a pretty basic game and won’t necessarily wow people, but the font gimmick is a good one, and the game itself is solid and satisfying. Even if you don’t like vertical shooters, if you you’re the kind of person who becomes incensed in the face of Comic Sans or can spot the difference between a regular and an italic period, then you’ll get a kick out of this game, I promise.