Love the Annoying Orange series on YouTube? Well, now there’s a way to get your fruity fix through a new app for the iPhone and iPod Touch. Annoying Orange: Kitchen Carnage takes Orange’s entourage and sticks them in the midst of an addictive physics based challenge of cut-throat cookery chaos.

I should admit that I’ve never been a fan of Annoying Orange; I just find it, well, annoying, but I found the game a completely different matter. Although the app still heavily features the the obnoxious citrus presence I so dislike, the gameplay is surprisingly well done and very replayable. Pro tip: you can mute the voices! 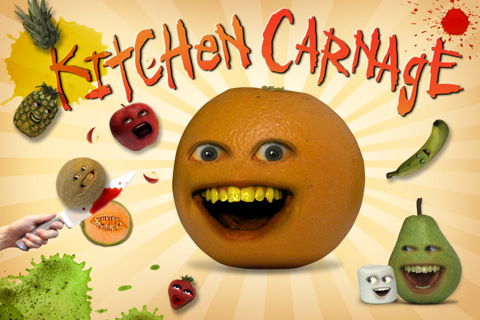 In terms of basic gameplay, Kitchen Carnage is a lot like playing Skee-ball. Your goal is to send fruit to their juicy demise by launching them at various kitchen death traps, usually blenders, but also occasionally a cutting board will show up for a dramatic KNIFE opportunity. To launch the fruit to its doom, you just slide/flick your finger across the screen. The harder or faster you flick, the farther the fruit flies.

Along the top is a level meeter for you to fill, and the more fruit you massacre, the faster it fills. Different fruit is worth different values, and you can rack up some juicy bonuses by getting lots of fruit into a blender in a row, so while speed plays a part, accuracy counts. Higher levels mean more blenders available and new kinds of fruit to launch. 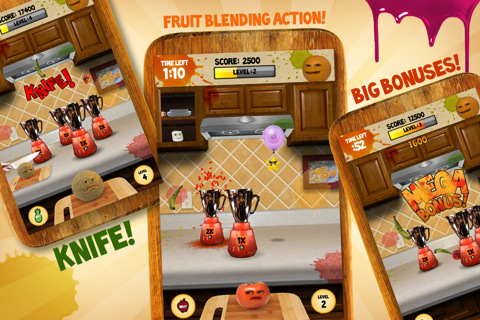 Orange, of course, is stationed up in a corner constantly jibbering inane commentary, forever safe and sound from the whirring blades of death. Occasionally you’ll be prompted to shake the device, revealing one of his talkative cohorts tucked away in a cupboard. If you manage to land a piece of fruit in the cupboard, you’ll get extra bonus time. Also, you’ll sometimes have the opportunity to try to toss a piece of fruit into the Oven Hood of Doom for a mega bonus.

Now, if you’re a fan of Annoying Orange, you’ll probably be delighted by this game. As for non-fans, it’s a little less clear. In my case, I really couldn’t stand the talking fruit, and I initially thought the game was too simple to really be good, but then I COULDN’T STOP PLAYING. It was kind of creepy to find myself pulled in despite my feelings towards Annoying Orange, but you should take that as a testament to the overall addictive and fun qualities of the actual game.

Here is a video demo of the Annoying Orange: Kitchen Carnage app on the iPhone