Apparently Candy Train started life as an old Popcap Game that had been all but forgotten over the years, but then one intrepid young programmer who was working in a completely different division of the company thought Candy Train deserved a second chance at life in the form of an app, so she poured in a bunch of blood, sweat, and tears to make it happen. Now it’s is available to all and the programmer has gotten a promotion. Isn’t that a sweet story? 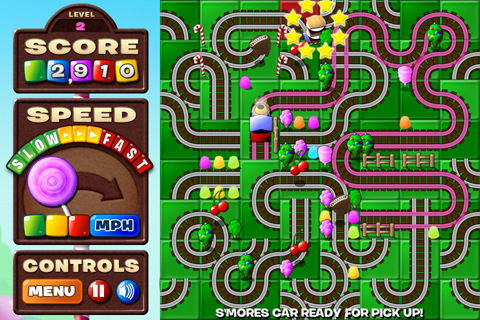 The game is actually pretty sweet as well. As you might expect, there’s a candy train chugging along a sugary landscape, and you are responsible for making sure there’s enough track for the train to keep going. If the train crashes, it’s game over.

The track is laid out in tiles on a grid, and you can tap on pieces to rotate them and change the track configurations. The train never stops going, so you have to work fast to set up the track, and over time, pieces will change, so you are constantly rearranging.

Adding to the madness are various candy-themed cars and stations for the train to pick up for extra points, so you might spend much of your time trying to get your train over to the S’mores car or the level up station. 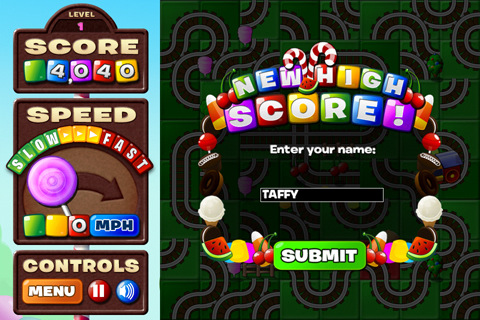 The longer you play, the faster your train starts to move, and as your train gets longer from added cars, the harder it becomes to maneuver. It’s a simple concept, but the game definitely becomes challenging in a relatively short amount of time. There are two difficulty levels to choose from, Normal and Expert, but I have to admit that I found Normal more than enough for me.

The bright and cheery graphics are about what you’d expect from such a well-established company as PopCap, but it’s a fairly spare game all around. Also, Candy Train doesn’t have quite the same cheeky appeal as Unpleasant Horse. I was also a little surprised and disappointed by the lack of online scoreboards, but given the history and very basic nature of the game, it’s understandable that it wouldn’t come with all the bells and whistles.

In general, I found Candy Train to be pleasant and certainly a very good deal for the price, but it’s not a super-exciting game and while not entirely dull, it’s not going to keep you occupied for more than a few minutes here and there.