Ring Blade by MindTrip Studios is an amazing game for the iPhone and iPod Touch. It is probably the first shooter I’ve played that is intuitive with the iDevices. What I mean is that the game does not autofire for you while you move around. This game’s art style is a mix of stylized graffiti and ink blot tests. It also reminds me a little bit of the enemies from The World Ends with You for the Nintendo DS. For this game the screen doesn’t move but you move on to the next wave of enemies after defeating them. Ring Blade is similar to many vertical shooters on iTunes but I think it makes a name for itself and should be played by shooter fans. 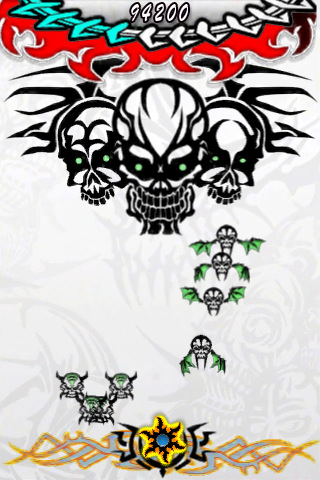 The controls are simple, all you have to do is slide the launcher left and right to move it and slide up from the launcher to fire ring blades at enemies. Bouncing off of walls will multiply the points you get for the enemy destroyed by the number of bounces. You can throw a power shot by allowing the blade to charge for a few seconds. Your health is the teal bar at the top of the screen and by pressing it you can pause the game. Try not to let your launcher take too many hits or it will explode into a black mist.

Even if you die, you can retry that level of the arena. On the fifth level you will fight against the master or boss of that area. Like many vertical shooters there are powerups to look out for. Some powerups are health recovery, invincibility, throwing out five blades instead of three at a time, a megabomb that destroys all enemies onscreen but does not affect bosses, etc. This app includes a leaderboard feature through Openfeint. 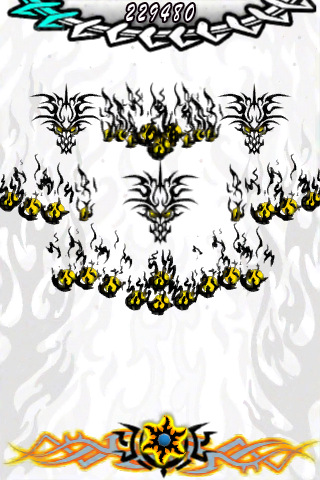 Ring Blade’s graphics is very stylish and detailed. This app resembles The World Ends With You (TWEWY) in this area. The enemies and powerup icons look similar to those found in TWEWY. I really like the graphics for this game since some of them can be abstract. Each arena has a certain theme like plants, fire, death, etc. Normal looking things are flowers with thorns and flames. Abstract enemies are floating skulls or strange geometric shapes.

The background of an arena has a faded image of its theme such as the burning flames in the Carnalis arena. When something dies it bursts into fading splotches. There is slight pixelation but you have to look carefully to even notice it. I think these are some amazing and stylish graphics for a vertical shooter.

The music is enjoyable and has some nice beats. I like it very much but it may sound repetitive to others. There is no iPod music support. The sound effects are terrific, some of them I like are sharpened blades and a burst of electricity from a megabomb explosion. The music and sound effects can be adjusted through a sliding bar. Personally, I enjoy the audio for this app and hope others will too.

Ring Blade sells for $0.99 in the iTunes App Store. This app has great controls and graphics. I like the fact that I get to choose when to fire my weapon rather than having the game do it for me. The visuals are impressive and feature abstract forms of fears like insects and death. The only things that I dislike are not being able to select a level to replay and the lack of replay value. I would like MindTrip Studios to add new levels and powerups if they can. Other than that, I recommend this wonderful shooter to anyone looking for something different and intuitive.