RunStickRun! by Robert Szeleney is a running game for the iPhone that features a stick man performing incredible jumps and leaps while trying to stay on top of various floating platforms as he runs headlong through nine different tracks. A very simple game to play, RunStickRun! is by turns addicting and frustrating as you guide the little stick man towards victory.

You may choose between nine different tracks to run on or Random to mix things up a bit. Tap on the screen to get started. In order to make your jumps, drag your finger in the direction of where you want the stick man to jump: short swipes for little jumps and longer swipes for higher jumps. The objective is to stay on the platforms for the duration of the run and avoid crashing to the ground. Slipping off the platform means instant death for the careless runner. 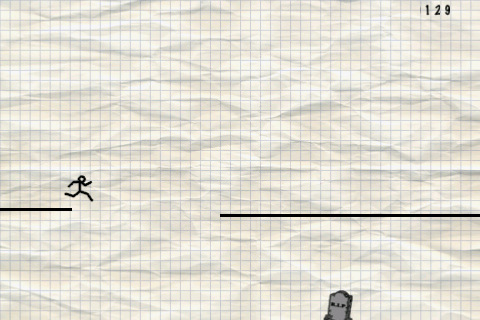 But there is a way to save yourself if you do fall off: below the platform is a car following you on your run. If you’re quick enough, land on the car and it will carry you safely below the platforms. Don’t stay on the car for too long, though. The car will start to break down as you continue your ride until it eventually blows up–you’ll die anyway. If the platforms are going too fast for you to keep up with and you need a break, hop up onto the prop plane flying above you to safely soar over them. But like the car below you, eventually the plane will break down and you will find yourself crashing, so don’t stay on it too long.

The graphics are relatively simple–a stick figure man, a plane, and a car with many, many platforms set against a graph paper background, making it easy on the eyes. Unfortunately, with such basic art, it was sometimes too easy to miss the next platform, leading to a needless death. The music is a screaming trance song that can be appealing to some and annoying to others. If it becomes too much for you, you can turn it off under Options. The game is easy to play while being pretty challenging at the same time. I died many times before I finally started correctly anticipating when I should jump and when I should simply hop. It’s pretty addictive as you leap from platform to platform, but with only nine levels the replay value is not very high once you’ve completed all the tracks. There were also some response issues: sometimes when I swiped, nothing happened, resulting in a pitiful death. There is also no “back to menu” button under Play, so make sure all your settings are just how you want them to be before initiating a game. Otherwise you’ll have to close out of the game and load it again. 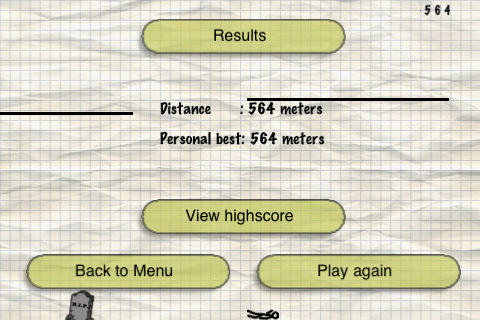 RunStickRun! is a great game to play when you have time to kill and need something fun that does not require you to commit a lot of energy to. Despite the little quirks, which can all be fixed with an updated version, I found myself continuously restarting after dying in each game; there is definitely a certain addictiveness to the game. But the fact is, there are other more fun running games out there with better graphics, music and game play.