Dragon’s Lair 2: Time Warp is not an ordinary iPhone app that you would normally see in the App Store. It is an animated game for the iPhone and the iPod touch , and it focuses strongly on cartoon-like graphics. It may require someone with cat-like reflexes and a good eye to play this iPhone game. Unfortunately, you will have a hard time playing it if you are colorblind.

The story in Time Warp consists of the Princess being stolen away in time by the Wizard Mordroc. He wishes to marry her, and put the death ring on her finger. She strongly resists, but if the ring does end up on her finger, you will no longer be able to save her. When you play through the game, the story will begin to show itself. If you do mess up in the game, the main character is still subject to death. Don’t worry, you will have plenty of lives. What sucks, is that every time you die or even press start, you will have to start from the beginning of the chapter. 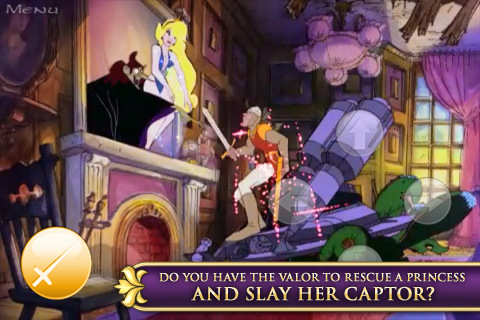 The game controls and interface are as simple as it gets. You will have four directional buttons, and a sword attack button. You will be shown a tutorial on how to use these controls at the beginning of the game. You will get “hints” that will pretty much show you what button you need to press in order to progress in the game. The difficult part is matching up the timing between the flashes of the yellow light, and pressing the correct arrow button. If you do end up getting better at this, for an added challenge you can disable the hints. This makes the game extremely difficult, however. So I do not recommend this.

Time Warp has a very high entertainment value with its classic 2D cartoon graphics and audio narration. I might actually consider Dragon’s Lair 2 more of an iPhone app, rather than an iPhone game. It is highly interactive, but you will catch yourself focusing more at what is going on in the scene, than what you are supposed to be doing on the screen. Being the competitive person that I am, I naturally wanted to complete the game as fast as I could. This led me to missing out on the story, so I had to play it a second time to fully grasp the concept. It was extremely entertaining to watch the character die, which released some of the anger when having to start the section over. 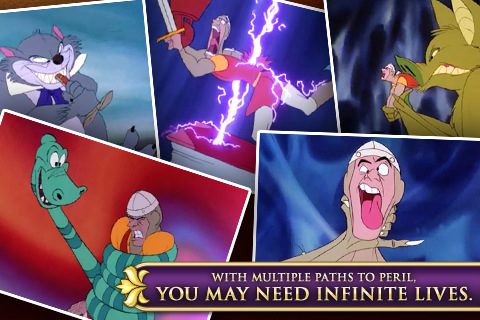 Overall, Dragon’s Lair 2 was an enjoyable game to play, and I definitely suggest you try it out. There are a few features that Electronic Arts should address. The main problem that should be fixed, is the fact that you have to start the section over if you die. The developer should be able to implement some kind of save system for the game. When that feature is fixed, it will only increase the gameplay value.

Here is a video demo of the Dragon’s Lair 2: Time Warp app on the iPhone