Space Leap is an intergalactic traveling game where you swing Earth around the gravity fields of other planets and stars to travel across the galaxy. Epic. Space Leap is released by Werplay Priv. Ltd and is available on the iPhone and iPod touch, for $0.99 or in a Free “Light” alternative format. I reviewed this app on my iPhone 3GS.

So the controls are like this: Zoom with two fingers, move camera with two fingers, and pause by tapping three fingers. Single tapping is how you actually play Space Leap. You tap and hold on a planet to highlight which route Earth will take around the gravitational pull of that planet. Do it correctly to collect small glowing stars but the main goal per stage is to land in the sun’s orbit. If you swing wrong, you might smash into another planet, fall into a nebula, crash into the asteroid belts, get destroyed by an unstable star, or get launched out into space with nothing to hang onto. 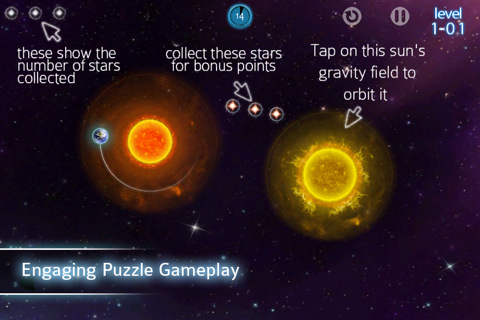 Space Leap is serenely gorgeous. The stars scrolling by, the very well done stars with its soft outer glow and the easy to read Earth combine so well together with the musical soundtrack. This is a ‘realistic’ take on space and the design choices made are spectacular. Clean and simple with enough detail to pop.

The gameplay of planet jumping is surprisingly engaging. Different levels provide different challenges based on how planets are arranged. You can even make it harder on yourself by trying to collect all the stars around the paths of the planets. The most different part of Space Leap comes from the timing against the asteroid belts and unstable suns. 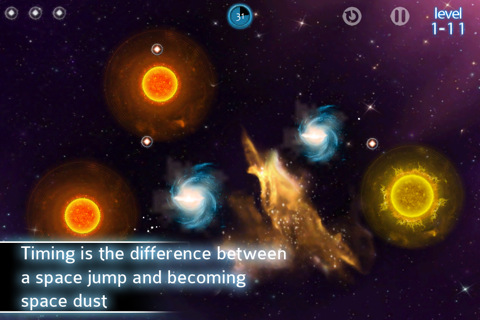 There are also a massive amount of levels. The first Zone has 63 all by itself (and its presented beautifully on a rotating planet belt of course). Each provide different time challenges and there are more announced as well. A great entry into the AppStore, Space Leap is a soothing, challenging, and distinguished game app with a great art design and even better level designs. There is a lite version… you have no excuses.