Released by Jonathan Kreuzer, Arno the Hunter is a shooter game where you play an arrow shooting crustacean battling against crazy aliens that attack you from above. Arno is available on the iPhone and iPod touch for $0.99 developed by Jon Kreuzer & Khang Le of Tenth Play. My review was done using an iPhone 3GS.

Wow. Just, wow. Take one good look at the screenshots and marvel. This is some of the best prerendered 3D environments I’ve seen for the iPhone. I really hope that this was all 3D content created specifically for this game because these jaw-dropping art pieces are stunning. Foreground and Background layering, elements moving in the background, enemies with unique designs with freaky amounts of details on the bosses, and your crab character who rolls around the stage. It’s all wonderful. 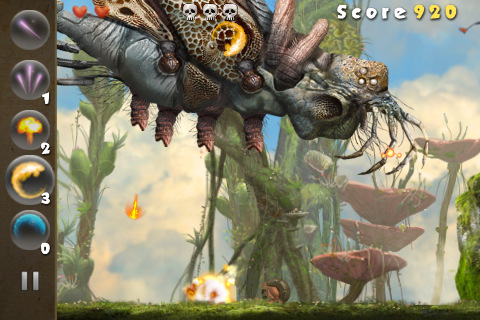 Gameplay is a fast, intense shooter. Move by tiling the iDevice, shoot by tapping. Where you tap is where you will fire your slow moving projectiles. The trick is to fire where the enemy will be, not where they are at the moment. Enemies swoop in from all sides at the top of the screen and you must evade their attacks by rolling around and firing. You collect powerups like spread shots, explosive shots, and boomerangs by killing enemies or destroying bosses. These abilities all have their own uses, some more useful than others. The balancing of the gameplay allows for each to have their own uses in different situations; none of them are too weak or useless. 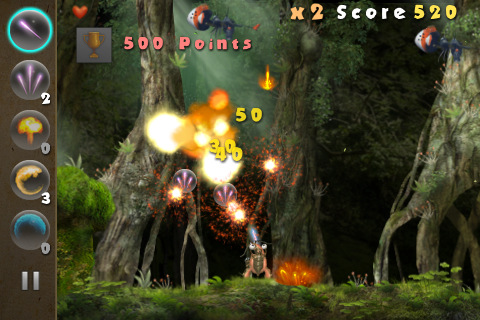 After all that praising, I honestly can’t find much to criticize about Arno the Hunter. The gameplay is well done with gradual teaching progression. Enemies get harder to kill as you roll to evade damage and the timing becomes almost an art to master. It’s fun, it’s intense, and it’s absolutely beautiful. No joking, the in game backgrounds are beautiful. I love the attention to detail and the cheap price makes this a steal.

Arno the Hunter, I hope one day to see a plushie of you in the mall in the future.