Silent Ops is a brand new action/shooter game from Gameloft, and is universal for iPhone and iPad. You take on the role of one of three agents in a secret organization out to protect the world from threats that other agencies can’t protect against. When another organization plans to take control of the world using cloning, it’s up to you to stop them in their tracks. 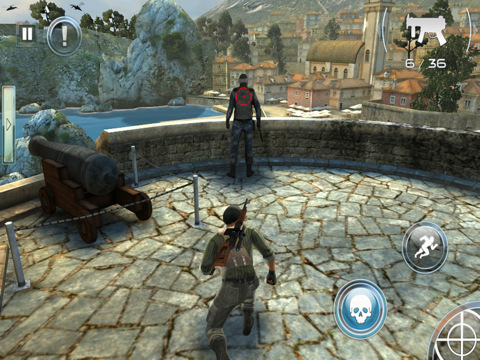 At its core, Silent Ops feels a lot like a James Bond game. You sneak around and infiltrate the enemy’s camps in a variety of locations around the world killing anyone that dares to cross you. Since killing is essentially the sole objective, Gameloft has given you many options to do the deed including a variety of firearms, hand-to-hand combat, and of course like any true spy, sneak attacks from behind. All of these methods feel pretty satisfying, and the reversal system (a button that lights up to reverse an opponent’s strikes) is challenging enough but delivers a great sense of accomplishment when timed perfectly. 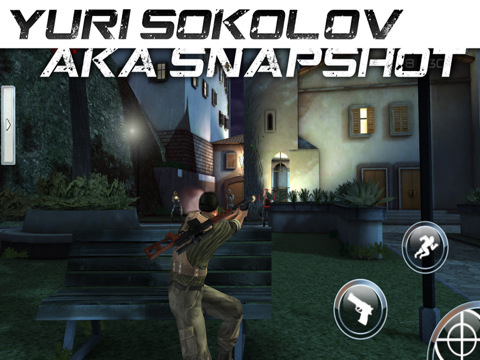 Visually, Silent Ops is a lot like so many of the other Gameloft games. It’s not a bad thing — Gameloft is way ahead of many of their competitors in terms of graphics. But if you’ve played other Gameloft games, they do start to look a lot alike. I can’t blame them, they’ve been cranking out a new title every few weeks, but when you see the words “Gameloft third-person shooter” you pretty much know how the gameplay will look. With that in mind, Gameloft did step up the visuals of their cutscenes. These cutscenes are of amazing quality and according to the publishers, Silent Ops features 20 minutes of movie-style cutaways to support the storyline. 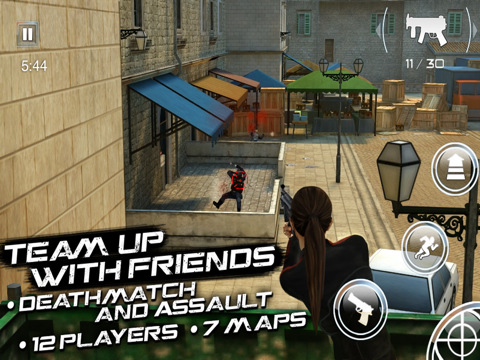 As far as the controls are concerned, Silent Ops features a floating joystick for movement on the left-hand side (in other words, the joystick appears wherever you put your thumb on the left side of the screen instead of being in a fixed position). This has become almost mandatory for mobile games as the lack of any physical buttons makes it impossible to keep your thumbs on a “static joystick”. On the right-hand side there are somewhere between two and four buttons depending on the context of your current situation. This brings up my first complaint with the control scheme. Namely, the buttons change function too often. For example, when you get within a certain distance of an enemy, the “shoot” button becomes a melee button — which is fine when sneaking up on an enemy, but in face-to-face combat I would rather use one shot to take down an enemy rather than engage in a fist fight. Also, movement feels sluggish at times, and swiping to look around isn’t as responsive as I would like (personally, I was a huge fan of Gameloft’s tilt-to-look control setup in N.O.V.A. 2).

Without a doubt, Silent Ops is a great game. If you’re a fan of spy and secret agent games, you’ll surely enjoy this title. If you’ve played a Gameloft action game before, Silent Ops will feel familiar, but you’ll likely find that’s not a bad thing. With a robust story and a fun online multiplayer mode, Silent Ops will provide hours of entertainment. Silent Ops is available now on the App Store for $6.99.