Have you ever watched an LA police chase and thought “I know I could get away if I robbed a bank”? Now you have your chance in Reckless Getaway, a new universal app for iPhone and iPad by Polarbit. Reckless Getaway is a top-down racer in which you attempt to make a getaway from a bank robbery and rack up as many points as you can in the process. With slightly cartoony graphics and a simplistic yet challenging design, Reckless Getaway is the perfect driving game for when you’re sick of the other typical driving games.

Reckless Getaway begins with a simple premise: you’ve just robbed a bank — now escape from the police with only great driving. There are no guns mounted to your car, no missiles you can fire at oncoming traffic, just you, lots of traffic, and police cars determined to stop you in your tracks. You must do everything you can to swerve in and out of traffic and avoid damage to your car, all while picking up coins along the way which fill star meters (think Rock Band) on the top of the screen. The more coins you pick up, and the better your driving skills, the more stars you earn on each level. As you earn more stars, you’ll unlock more tracks and levels to wreak havoc through. The casual gamer in me loves the feeling of achieving all four stars on a level I’ve worked so hard on. 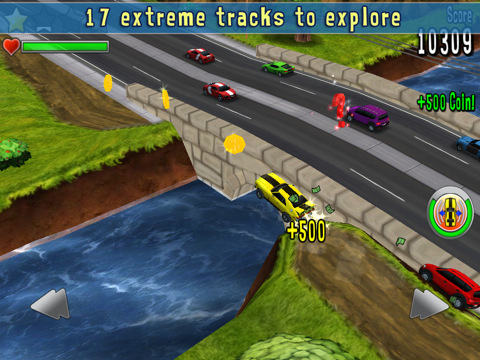 Reckless Getaway features a very simplistic control scheme. Left and right arrows on the bottom of the screen control your steering, and driving over question marks will earn you powerups like jumping or speed bursts, which can be activated by tapping a button that appears on the right side of the screen. Conversely, you can enable tilt steering to steer the vehicle, leaving the powerup button as the only tappable icon on the screen. I found that the default sensitivity was too sensitive on the touch steering, and not sensitive enough for my tastes on the tilt steering — but playing around with the sensitivity sliders in the options menu gives you the ability to customize the sensitivity to your own taste. 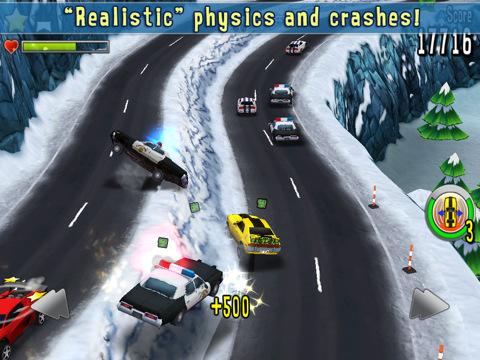 As I mentioned before, the graphics of this top-down racer are slightly cartoon-like, cars have a ring of stars above them after they’ve bumped into another vehicle for example, but that doesn’t mean this is a simplistic game. In fact I’ve found it to be very challenging and sometimes maddening to get all four stars on a level, but it’s so much fun that I keep coming back and trying again. The game’s sound design is great as well, as the dramatic upbeat background music sounds like something out of an action movie and the crashing metal and police sirens are a nice touch to keep you entertained.

Reckless Getaway is a fun casual racing game that can surely steal hours away from you if you’re not careful. While it isn’t the deepest racing game (you simply play each level with no “career” mode or online racing), the challenge of the single player mode is enough that it won’t get old anytime soon. And with the developers promising more chapters and game-modes in the future, this is a game that’s never going to feel stale.