DEO is a new iPhone and iPod touch game from Seattle based developer “Strapped to a Meteor”. Like many people (I hope) I play games for a certain sense of escape, something that is especially true of the casual iPhone game that is my saviour on many tube journey, bus stop or extended period of time with my family. It’s good to have an idle distraction from the mundane day to day. So when I fired up DEO for the first time, from a bus stop in a bleak, post-industrial wasteland in East London the bleak, gloomy landscape of DEO was a little bit of shock. Would playing this game make me feel better … Or worse?

Fortunately, the answer is “better” as the gloomy landscape is all part of the charm of the game. The goal is to help DEO travel the serenity of space to create life and revive hope, mirroring the feeling of elation you get when you leave Stratford (I found imitating Harry Belafontanie whilst saying his name also helped with the game’s charm “DEO, DEO, daylight come and me wanna go home”. Feel free to sing that whilst reading the rest of this review”.) 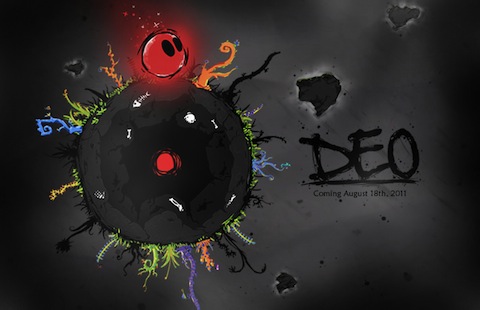 DEO is a little red dot with the heart of a Mexican frijoles saltarines. The game starts with DEO sat atop a revolving chunk of earth, contemplating his limited options. Green patches of earth are “safe”, with black patches prone to reducing poor DEO to a cinder. The goal? To hop across to the target red patches. It’s a simple, yet solid premise for a casual game – all that’s requires from the player is concentration and some well timed jabs at the screen with one’s finger. As you’d expect, the levels get progressively more challenging as time progresses and it was fairly easy to get sucked into a world of fire, grass and terraforming. 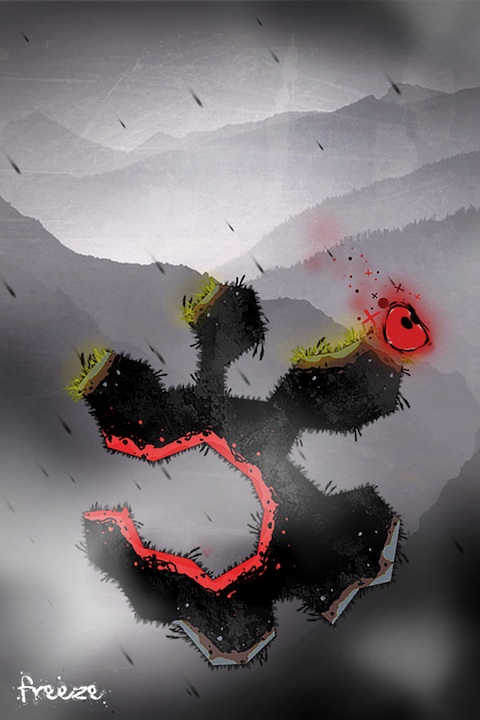 Terraforming? Yes, progression in the game is marked via a reward system, wherein you get to build a planet as you progress. By performing well in the game, your planet, as displayed on the main menu, will begin to grow and produce life, thereby cheerfully offsetting some of the bleakness of the in-game design.

With two worlds and 96 levels, there’s more than enough game play here for many, many bus journeys –

DEO is an arcade/strategy game intended for all ages and will be hitting the App Store Aug 18th for iPhone and iPod Touch (OS4+) at $0.99.