So you called in sick to work, or played hooky from school on “Maddenoliday” — the day that Madden NFL 12 was released on all the major video game consoles, but what now? Eventually the real world will come calling again and soon you’ll have to put the controller down and fulfill the responsibilities of life. If only there was some way to put all the thrill of the NFL season in your pocket and take it with you. Enter Madden NFL 12 for the iPhone from Electronic Arts. 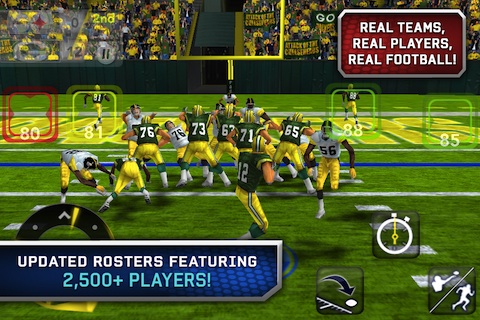 Madden NFL 12 is a very solid rendition of the popular console version of the NFL football simulation game. This year EA has bolstered the number of actual NFL players available in the game to 2500, and features accurate rosters for all 32 NFL teams. In fact, as soon as I downloaded and opened the app, it went and made sure that I had the most recent roster available, which is a welcome sight for stat junkies, especially with all the player moves that occurred after the lockout ended. Once the rosters download, you can dive into a quick exhibition game, start a new 16 game season, or jump right to the NFL playoffs. 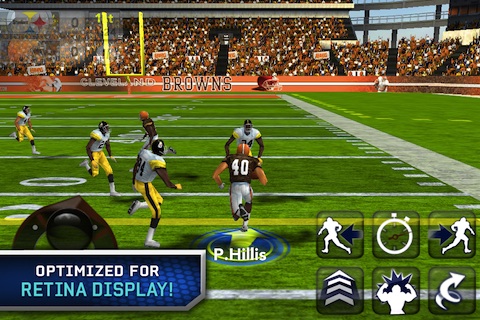 The gameplay of Madden NFL 12 for the iPhone is definitely improved from last year’s version, it feels like you have more control over your players and are able to more accurately get them to perform the moves you want. Moves can be controlled by the virtual buttons in the bottom right corner, or by swiping the player in a certain direction. I found that swiping the players was a lot easier than hunting for a certain button, but some may like trying to replicate the feeling of using a console controller. That’s not to say that there aren’t some problems with controls. First, the players feel very sluggish, almost as if the entire field were a big quicksand pit. It’s not a big deal once you get used to it, but don’t expect to see Adrian Peterson flying up the Metrodome field in the same manner you would on an Xbox or Playstation. Though sluggish as they may be, faster players are still noticeably faster than slower players so it doesn’t affect gameplay for the most part. Passing can be accomplished by tapping a receiver, who will have a box surrounding him that lights up a certain color depending on how open he is (green = very open; red = a probable interception). It’s an interesting feature, but Madden purists may balk at the game essentially reading defensive coverage for you. 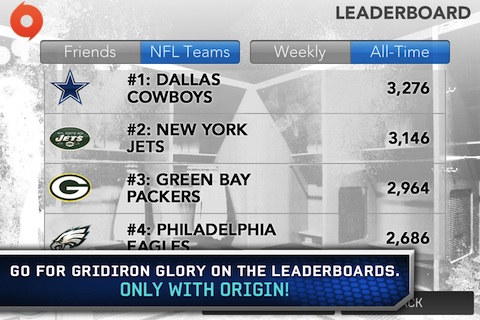 Like the console versions, Gus Johnson and Cris Collinsworth provide the commentary, while John Madden will occasionally chime in with (mostly recycled) quips and comments. The announcing is bearable for a mobile game, but the unchanging static crowd noise is a definite annoyance. Foxboro Stadium’s fans should not sound exactly the same for a Ben Roethlisberger touchdown as they do for a Wes Welker catch. Still, Johnson’s exclamations are always fun and make up for the poor crowd noise.

All in all, Madden NFL 12 for iPhone is a good, but not perfect mobile version of the gridiron giant. While it may not replace the console version for hardcore fans, it’s definitely a great way to get that quick Madden fix at the office or between classes. If you love the NFL, this is a hard one to pass up, even with a few quirks. Madden NFL is available now in the App Store for $6.99 for iPhone/iPod touch, and $9.99 for iPad.